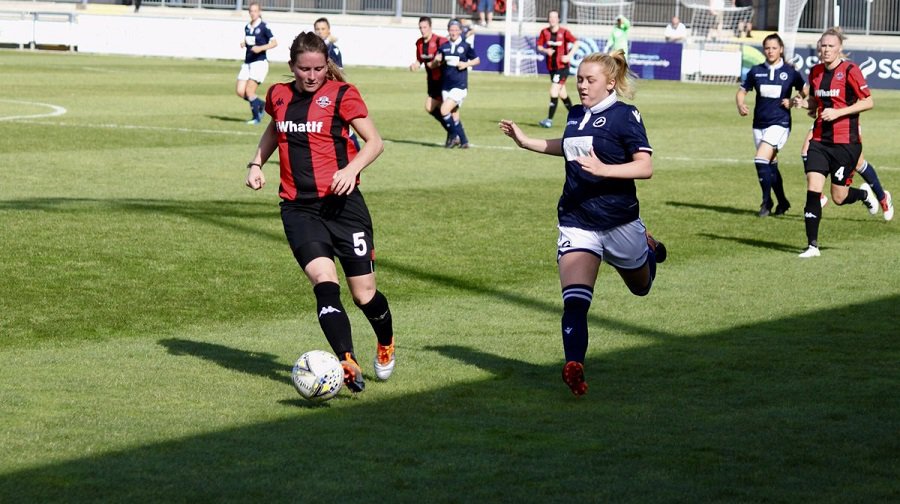 The Lionesses conceded in the second minute from a corner as Lewes’ Sam Quayle headed towards goal and after a scramble the referee’s assistant judged the ball had crossed the line.

Lewes gained confidence from going ahead early and doubled their lead when Rebecca Carter won possession deep in the Lions half and broke into box to unleash a powerful effort which found the bottom corner.

The Rooks went on to add a third goal on the stroke of half time. Lewes broke down the right through Victoria Carleton who found Quayle and the goalscorer unselfishly set up Avilla Bergin to finish.

The Lionesses regained their composure in the second half at Dartford’s Princes Park and retained possession better than they had before the break. But Lewes were dangerous on the counter-attack and went close to a fourth, but Lionesses stopper Grace Taylor made a spectacular save from Bergin’s long-range shot.

“I think in the second half we got better, which is what I can take away from the game,” Lionesses boss Phillips said. “A few mistakes in the first half cost us on the first two goals, but their third goal was a well-worked goal from them so I will give them credit on that.

“I thought we could have done better in the first half, but in the second our retention of the ball was better and we created a couple of chances

“At half-time, I told them we have to find ways to play. Teams are going to come here and press us, which is okay, but we have to find ways that we can play around them. These girls play at their best when the ball is on the floor, so they have to show the courage to play in difficult situations.

“It’s going to be like this for the first half of the season. It’s going to be a learning experience so the girls have to come in and carry on showing fantastic energy in training and keep working, and hopefully things will improve.”

The Lionesses face a derby at West Ham Ladies in the FA Continental League Cup next Sunday.

Phillips said: “It doesn’t get any easier, does it? We’re going to need to go away in training this week and work on our shape with the ball and our press out of possession.”

Lionesses captain Leanne Cowan only managed to make the bench for Sunday’s game and Phillips explained her absence from the starting line-up.

“She has been carrying a knock, so we felt why play a player in one game and then put her out for four, so we keep her rested,” he said. “If needed I would have brought her on, but I felt it wasn’t worth risking.”

And the skipper was honest in her assessment of the performance.

“Obviously, we have a lot to work on,” Clarke said. “I think we need to start the game better, be stronger and more competitive so we start winning the first balls, second balls and even third balls.

“We need to come together as a group and think about ways where we can start the game more competitively and begin on the front foot.

“The average age is about eighteen, so we have a ridiculously young squad, but we have Georgie [Giddings] coming back soon which will give us more experience and the more game time the girls get the better they will become.”