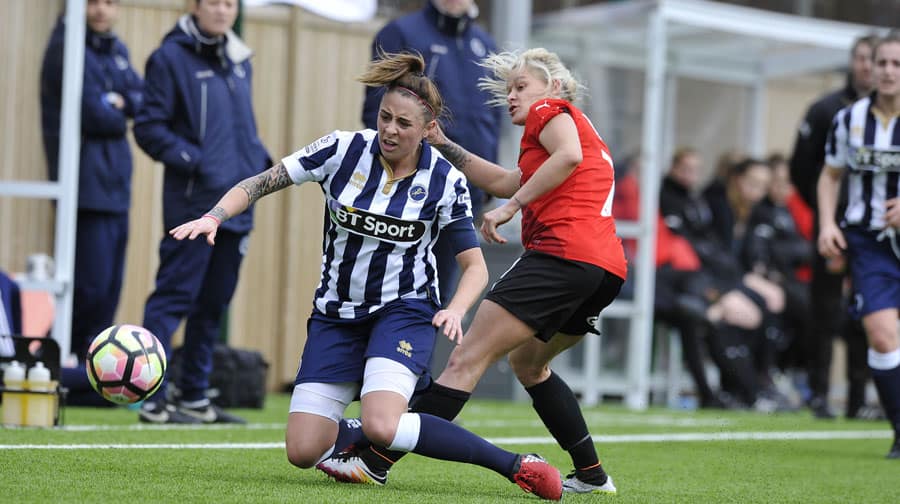 ASHLEE HINCKS said it was “disappointing” and “frustrating” after Millwall Lionesses lost 2-1 to Sheffield FC Ladies in the FA WSL Spring Series last weekend. It was Millwall’s second successive defeat after their opening-round 1-0 loss to Durham Women.

The away side went ahead when Hannah Cain’s cross crept in, before Sophie Jones doubled the lead. Hincks pulled one back seven minutes before half-time and later hit the side netting, but Lee Burch’s Lionesses couldn’t rescue a result. “It’s definitely disappointing not to get the three points,” Hincks said. “I think, barring the first 20 minutes, we were completely dominant. “We had a chance at 2-1 which we should’ve taken, which would have changed the course of the game completely.

It would’ve been 2-2 with 30 minutes to go. “It is frustrating, I think we’re so much fitter than last year. The last fifteen minutes in each game we’ve played so far we’ve been completely up and above the other team. “We can’t just seem to find that last bit again. It was the highlight of our year last year but, looking at our games, we have scored goals. “There’s goals that we’ve scored in the last few games that we really wouldn’t have scored last season, so that’s definitely improved.”