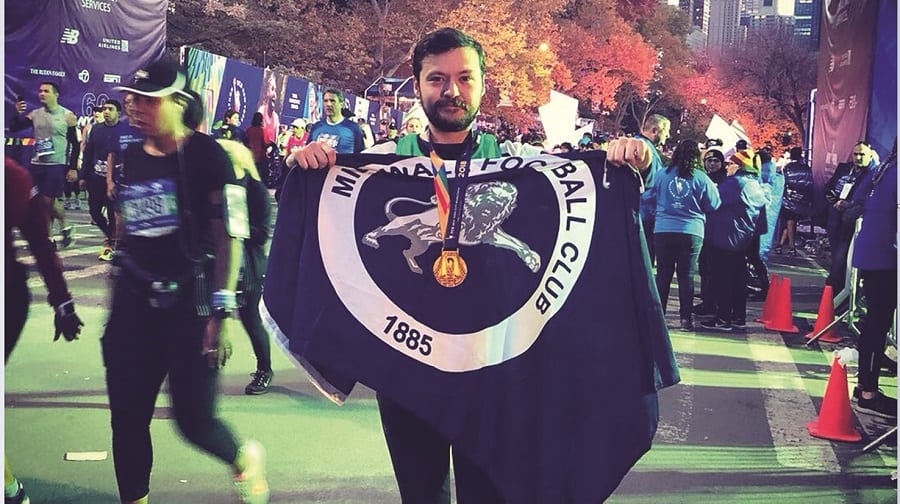 A MILLWALL supporter flew the flag of his beloved club in New York City after a “mentally draining” but “breath-taking” marathon experience earlier this month.

Bermondsey’s Dave Elson, 25, completed the iconic race through the dramatic cityscapes in an effort to hit a target of £4,000 for Macmillan Cancer Support.

“I can’t put into words about the race,” Dave told the News. “It was such an amazing experience: mentally draining at times, adrenalin rushes at times, painful.

“The people of New York kept me going, kept pushing me and urging me on. A New York-based Millwall fan met me at the last half-mile and that for me was incredible. The best day of my life.

“The weather was absolutely perfect. I was scared about my knees giving way like they did at the Royal Parks Half in Hyde Park where I spent some time in the medical tent. But I got through the pain and even walked some of the race because the pain was too much to run. I got there through sheer fight and determination which I didn’t know I had.

“Usually I use an app that gives me the time I’m running but I didn’t use it this time, I just went with my own feel of the race, going faster when the crowds were there and slowing down when it was quiet to regain composure.

“It was a personal battle for the last three miles but after I had got to mile fifteen I knew it was happening no matter how long it took.

“I had started off a bit steady, but felt like I hadn’t run beforehand for an eternity. As soon as I reached Brooklyn the crowd was immense – music, people handing out water and cheering us on.”

Dave had made sure to appropriately sound-track his race.

He added: “The views across the bridges were breath-taking and unforgettable with the sun beginning to set. Moving into one borough at a time with a popular New York repertoire – Notorious B.I.G, Alicia Keys, Salt-N-Pepa – really gave me goosebumps.

“Crossing the finish line is probably my favourite moment of all time. I’m more than tempted to come back to do the half-marathon in March. Bring on London!”