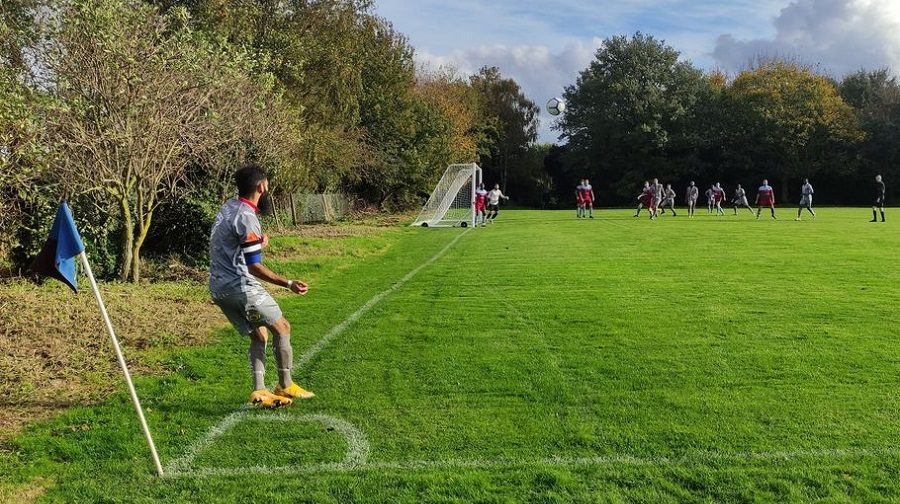 Peckham Town reclaimed top spot in the Kent County Premier Division after a 4-2 win in a controversial match at Borden Village last weekend.

The Menace were returning to Borden Village for the first time since a windswept day in March 2019, as the team had missed out in the two previous seasons due to curtailed campaigns.

The visitors went in front after good pressing from their forwards to allow Josh Montella pounce on the loose ball and finish left-footed into the far-left corner.

Elton Romaku made an excellent save to keep Peckham in front but the hosts levelled in the 20th minute through Matt Rowe.

It didn’t take long for Peckham to regain the lead when Tidian Barry let fly from 30 yards and the ball took a deflection on the way home.

Barry was then sent to the sin bin 30 minutes in after disputing the award of a free-kick on the edge of the box with the referee.

The eventual set-piece was deflected and Mustafa Hashemi then required lengthy treatment for a head injury following a reckless challenge.

The match restarted six minutes later before Peckham forced a series of corners late in the half and finally Montella got his second from Nicky Meta’s delivery.

Early in the second half Herve Mbongue went down on the edge of the box after an-off-the-ball incident. The assistant flagged it to the referee who decided a booking was sufficient. Mbongue struck the resultant free-kick off the crossbar.

But Peckham got their fourth an hour in. Nicky Meta delivered a free-kick in a pre-planned move with Charlie Egleton moving at pace to the near post to tap home from eight yards.

Lee Armstrong got one back for the hosts when he fired home a free-kick from the edge of the box.

Joe Thomas came on for Egleton with 20 minutes left as he returned from injury and picked up a yellow card for kicking the ball away. Barry had a shot palmed away from close range, and David Gabor’s effort was tipped over by the home stopper.

Borden committed a number of poor fouls late in the game. Montella was taken out from behind by a dangerous looking tackle on the halfway line as Peckham looked to counter. He then had his ankles kicked by the corner flag before, in injury-time, Emmanuel Cobbina had to go off injured following a tackle in the corner of the pitch.

The win combined with a draw from Hawkinge lifted the Menace back to the top of the league.

She said: “I can’t ask for more than what the guys put out there today. We have had an up-and-down roller coaster ride over the past few weeks and we just want to go out there and play.

“We are getting players back in after injury, and it’s great to see them back out there. We knew it wasn’t going to be easy with the intensity of the game we were up against with Borden.

“The fight was there, as well as the will to want to play and to take the opportunities that were there.

“A fantastic result, three points and four great goals – an eventful day for all that were watching”