BOTH sets of players clashed in the second half. 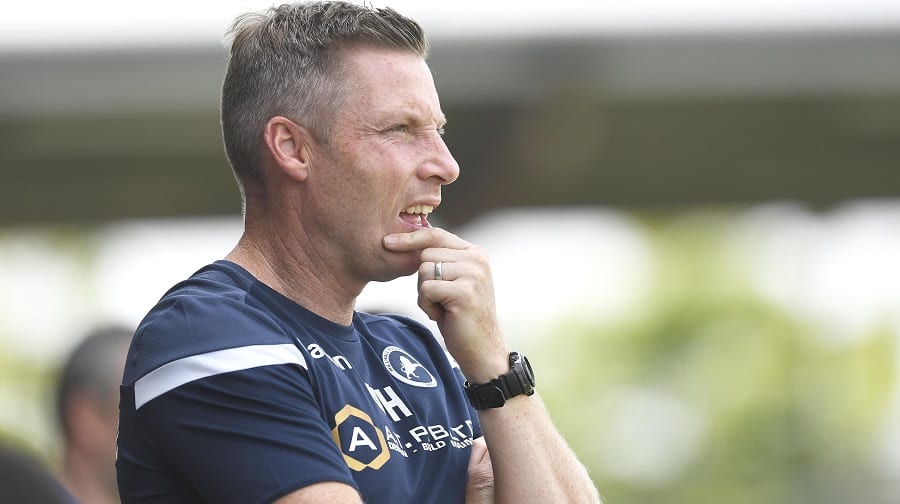 NEIL Harris was disappointed with his side’s attacking display in their 1-1 draw against Brentford on Friday.

The Bees played for 55 minutes of normal time – and 12 minutes added-time after both halves – after Henrik Darsgaard’s red card for a last-man foul on Ben Thompson.

Millwall had gone ahead through Lee Gregory, before Joshua Da Silva’s equaliser.

Harris brought on Tom Elliott when Thompson went off injured in the 40th minute.

“When you play 55 minutes against 10 men you’re frustrated not to win the game,” Harris said. “How good a point that is we’ll know a little bit more in and hour-and-a-half’s time. We’ll certainly know more May 5.

“It was a tough game for us today. I felt that Brentford could come and be like Brazil today. When you’ve got quality players with no pressure, it’s a tough team to play against.

“My only frustration today is our lack of frustration in the final third. The amount of final-third entries, 11 versus 10, will be off the scale. Did we do enough? No.

“They got in a fifth or sixth of areas we got into, but were better in those areas. That was the difference between is and Brentford.

“Point gained? We have to look at it as a positive going into Villa Monday, but there’s disappointment we didn’t create more.

There was a flashpoint in the second half when Elliott fouled Mads Bech Sorensen and both sets of players became involved in scuffles.

Emiliano Marcondes hit the deck after he appeared to be shoved by Jed Wallace. Marcondes responded by pushing Wallace, who also fell to the turf.

Elliott and Marcondes were booked.

Harris said: “I was a bit appalled by some of the things I saw on the pitch, I’ve got to be honest. I didn’t think it was particularly spicy.

“There was an incident right in front of me that was quite comical, some of the play-acting, but that’s modern-day football.”

Of that accusation, Bees boss Thomas Frank responded: I disagree. Nothing more to say about that. What’s done is done, move forward.”

Frank added: “It was a deserved point, we had chances to win the game. It’s a very difficult place to play, they’re fighting against relegation.

“So I was proud of the players today.”