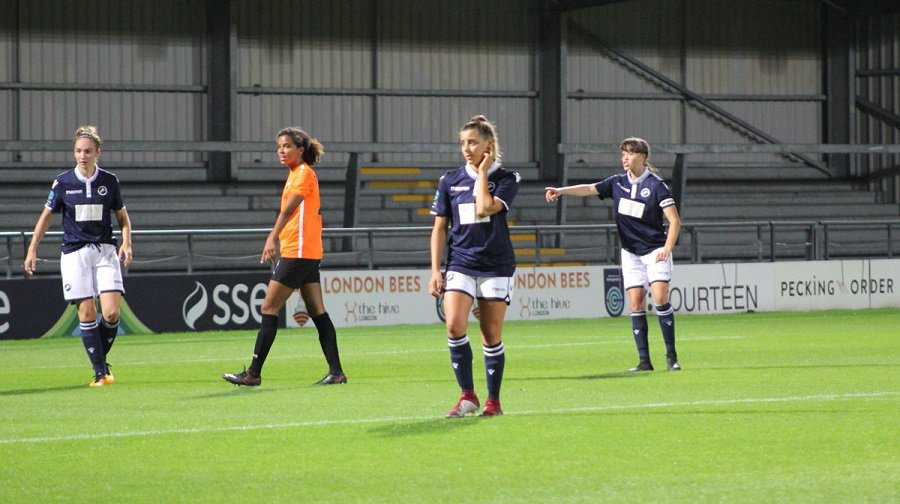 IT WAS a Mother’s Day special for the Lionesses at Dartford last Sunday – but it was Aston Villa who took the points back to Birmingham after their Women’s Championship clash.

After Millwall Lionesses players walked onto the pitch with their mums before the game, and flowers were handed out to those in attendance, it was a frantic start with Villa taking the lead through Jodie Hutton in the seventh minute.

The Lionesses found an equaliser on 20 minutes when Lumsden lifted a free-kick into the Villa box and Alice Hassall put through her own net.

Hutton and then the Lionesses’ Evie Clarke were next to strike the woodwork, before Villa regained the lead just before half-time with Tanisha Smith tapping home beyond goalkeeper Rhiannon Stewart.

Villa wrapped up the points in the 69th minute when Aoife Hurley headed in.

“It was frustrating, if I’m honest,” Lionesses boss Chris Phillips said. “You’ve seen recently we’re trying to play a different way to what you saw earlier in the season and I think the girls are grasping those concepts, they work hard every week in training on them.

“It’s frustrating, three goals, I put two down to individual mistakes, and the set-piece we’ll look at the tape and see what went wrong.

“The girls have got to be honest with themselves and work out where they have let us down. We conceded right on the stroke of half-time after getting ourselves back in the game and looking to dominate. Goals like that hurt you.

“It probably encouraged them a little bit and knocked the wind out of us a little bit, that’s probably what affected the game in the second half.

“Goals change games, unfortunately we’ve hit the woodwork twice and they’ve put the ball in the back of the net just before half-time.”

Phillips’ side are bottom of the table, ahead of their next game against Durham on April 21.

Phillips added: “We’ve got a few going away with England, I’ve given the girls next weekend off and we’ll make sure we’re good for the next game.”