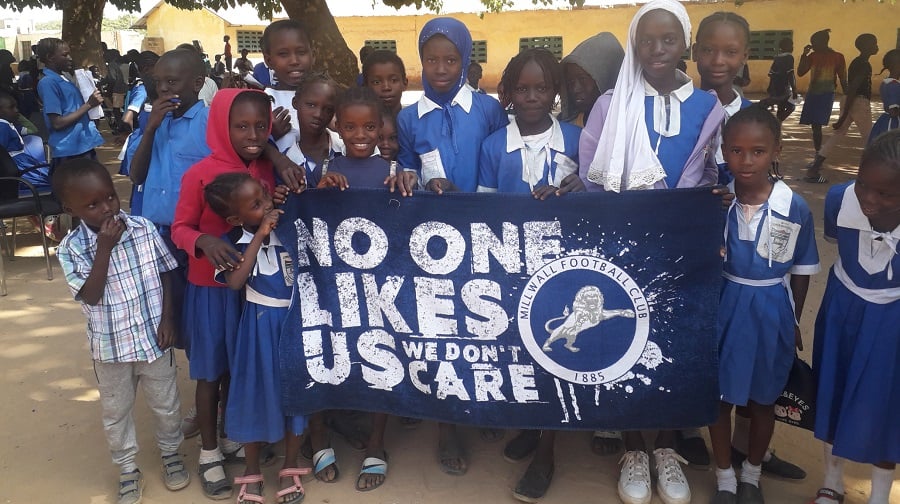 Millwall fans like to chant ‘No one likes us’ – but there’s a group of kids in a school in West Africa who probably disagree.

It was organised by Millwall fan Jacqui Knight, a 50-year-old mum of two from Penge in south-east London. The kids show off their Millwall gear and educational books

Jacqui was originally in Bijilo for a friend’s wedding in May 2019, and hoped to find a local school to donate t-shirts she had brought with her. The school was near her hotel, and after the conversation turned to football Jacqui grabbed the opportunity to teach the kids Millwall songs and chants.

It didn’t end there as on her return home Jacqui posted a plea on Twitter for more donations and she was overwhelmed by the response after the interest took off online. Jacqui, far left, at the school

Jacqui raised money through a Justgiving page for her return trip, and Mike Cotter of DHL – a West Ham fan – organised for the haul to be taken door to door free of charge.

Gambian station QTV were also there to cover the event as head mistress Mrs Sanneh welcomed Jacqui back. “It’s amazing how this whole experience was organically produced, from me just attending a wedding last May,” Jacqui told the News. “It’s amazing how spreading a little bit of Millwall love can generate such a reaction from fans, and also more importantly, a nice heart-warming Millwall story, instead of some of the negative stuff that gets printed about our club and our fans.

“Millwall fans are without doubt the best fans in the world, and I am very proud to be part of such an exclusive family.

“It was a totally wonderful experience and one I will never forget for as long as I live. I felt extremely humbled and appreciated like never before, I really did feel the love – and we sang Millwall songs!”

And Jacqui is determined the touching story is not going to end there.

“I couldn’t leave The Gambia without connecting the kids, so hopefully over the following months, children from two schools from the UK will link up via email with the schoolchildren of Bijilo Lower Basic School to form email ‘penpal’ friendships.”