Millwall Lionesses’ Amy Nash on challenges and benefits of being dual signed, fitness after lockdown – and playing for the team she supports

'Being a Millwall fan myself, playing for Millwall means a lot to me - making my family and friends at Millwall proud' 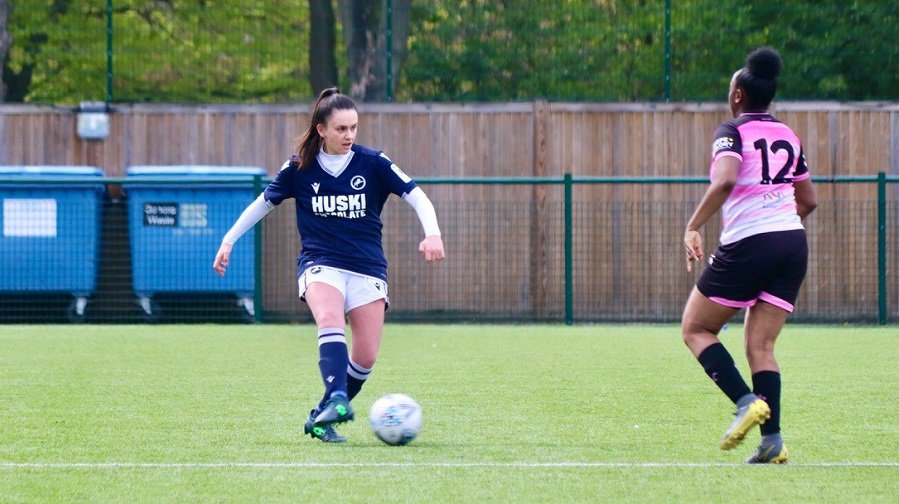 One of Millwall Lionesses’ brightest talents since the restart of organised sport, Amy Nash, says it’s a “pleasure” to be playing for the club – as she fits in training and games with her university work.

The midfielder, who is also dual signed with AFC Bournemouth Women and studies Sports Therapy at Bournemouth University, scored in the friendly win against Hackney Lionesses recently and the Rotherhithe-based side returned to action after the third lockdown.

Katie Whitmore’s side also defeated Upton Park Ladies before losing 2-0 to Kent Football United, who play two league above them.

Nash is happy to be back playing again after the challenge of a long lay-off and the uncertainty over when sport would resume.

“These games have been a pleasure to play in with the team. It’s the first time I’ve been with this squad for consecutive weeks since being at university most of this season, and I’m enjoying it so much,” she said.

“Obviously it’s tough to be back after months without games. However, the individual sessions and fitness plans have helped with our upkeep dramatically. The games themselves against Hackney Lionesses, Upton Park Ladies and Kent Football United were a good test for the team, especially the Kent game, as we were able to try new things and test ourselves.

Nash, who opened the scoring in the victory over Hackney Lionesses, and has received praise from management and staff for her calm and composed demeanour in games, is enjoying testing herself with Katie Whitmore’s side.

“It feels great to be on the scoresheet,” she said. “Millwall have played me in new positions, with more opportunities, and that I am very grateful for. I feel that a majority of these games have gone well, both personally and as a team.

“The Kent Football United game was a big test for me, in which I struggled at some points. However, you can only improve from pushing yourself to limits in new positions.

Nash praised the coaches and backroom staff for getting the squad up to speed after so long without training or match action.

“Since coming back, the staff have been brilliant,” Nash said. “With our coaches providing one-to-one sessions and [fitness coach] Andy Ferguson providing a fitness plan that was challenging, but engaging.

Nash outlined the challenges and benefits of being dual signed by two teams. “The constant switching from team to team is difficult, but I feel it improves me as a player.

“As I play different positions at each team, it allows me to gain more experience, making me a more flexible player.

“Being a Millwall fan myself, playing for Millwall means a lot to me, making my family and friends at Millwall proud.”

At this point of the government’s ‘roadmap’ out of lockdown, games are still behind closed doors.

But Nash is thankful for all the support that the team have been receiving on social media, and is looking forward to having fans back at home games when the guidelines allow.

She said: “I want to thank the fans so much for their support, it helps a lot more than people realise.

“I hope that they keep supporting us, and hopefully we can have some supporters back at St Paul’s soon.”

Southwark NewsSportMillwall Lionesses’ Amy Nash on challenges and benefits of being dual signed, fitness after lockdown – and playing for the team she supports