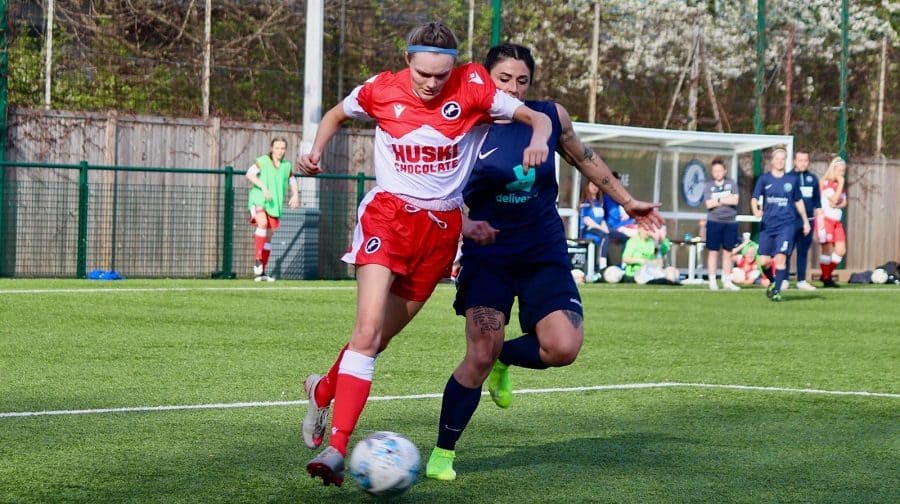 Millwall Lionesses manager Katie Whitmore was pleased with the implementation of training ground plans which then allowed her team to enjoy being back in action after such a long lay-off as the hosts defeated Hackney Lionesses in their Easter Sunday friendly at St Paul’s.

The Lionesses were able to plan for a friendly schedule as outdoor sport resumes across the country.

“The key messages for the girls were, ‘can we implement what we tried at training on Monday and Wednesday, and then could we have fun? You’ve been off for so long, so go out and enjoy it.’ Make the most of it, show Alex [Russell, Millwall Lionesses assistant manager] and I how much they’ve missed the game, and I think they did that.

“In this nicest possible way, it could have been a much higher score-line. It could have been a lot more if their goalkeeper hadn’t made some superb saves for them. I think they had good work rate, and our girls need to make sure they turn up to a game regardless of what tier a team is in and treat it like a cup game or it’s the most important game they are going to play this season.

“We had Lily Slater step up from the under-16s within the pathway and she had her debut with the first team. I think that’s a big achievement for her and you have new characters who haven’t been able to play as much previously, so Amy Nash hadn’t got much time to play because of other commitments and she was able to play and show us what she can contribute to the team.

“We asked individuals to step up and play in positions that they hadn’t played before – Amy, Millie Connell – and they all did it.”

Whitmore also had a message for her squad ahead of this weekend’s friendly fixture with Upton Park Ladies at St Paul’s.

“Turn up wanting the fixture,” she said. “Enjoying it, playing for and covering each other and playing the football that we are trying to implement in training.

“As long as they do that and they show that they are trying, that’s all that me and Alex can ask is that next week they do the exact same and put the same amount of hard work in.”

The opposition management team, Jamie Gardner and Mark Addison Tweed, were pleased their newly-established side had the opportunity to play a team with the history of Millwall Lionesses.

“We always knew it was going to be tough playing Millwall Lionesses, as we kept mentioning, the ‘powerhouse’ of women’s football.  But, it was a good experience for us all and I think that we tried to play football at times.  When we did try to play, we got through on occasions, but it was just a lack of fitness and that cost us, we think.

“But other than that, it was a good game of football.

The duo hope for more opportunities to play the Lionesses at St Paul’s as the clubs forge a link-up.

“Certainly some of the squad have said that they want to improve their game and get better, so I think coming to somewhere like Millwall is definitely worth doing on a more consistent basis to test yourself.  Hopefully some of them will stand out and get the opportunity to play at a good level.”