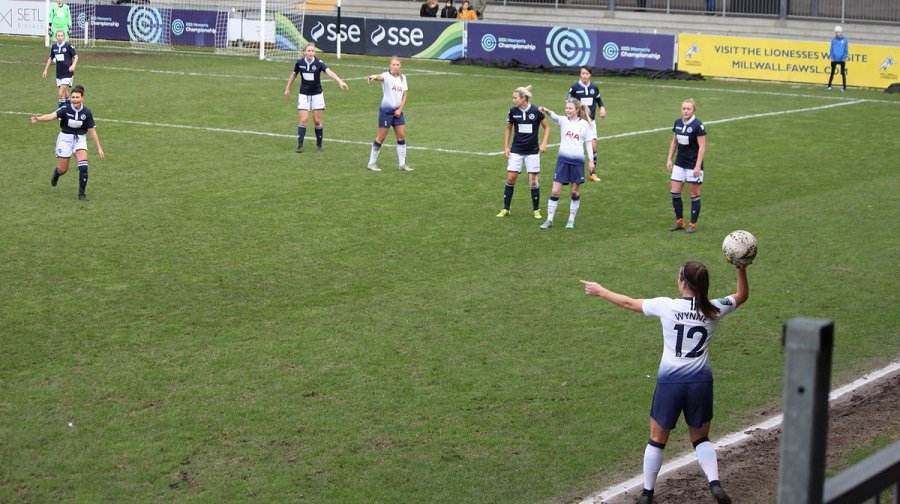 The Lionesses were moments away from a draw with the league leaders. Image: Millwall Supporters Club

MILLWALL LIONESSES manager, Chris Phillips, argued that the 3-2 defeat to Women’s Championship leaders Tottenham Hotspur last weekend showed how far his side has come in a short space of time as only a last-minute winner denied them a point.

The Lionesses lost 8-0 to Spurs earlier in the season, but were moments away from earning a draw in Dartford.

Spurs dominated possession throughout but the Lionesses defended resiliently and limited the visits to very few chances in the opening exchanges.

The deadlock was broken ten minutes before the break when ex-Lioness Megan Wynne whipped in a furious cross that was met by Sarah Wilshire’s side-foot volley that found the back of the net.

The Lionesses responded well to going behind. In the 44th minute, Georgie Giddings cleared the ball from the edge of the eighteen-yard box to send Evie Clarke away on the break. The Millwall striker beat both Spurs centre-backs for pace and slotted home.

Spurs restored their lead through substitute Emma Beckett, before goalkeeper Chloe Sansom stopped them from adding a third when a finger-tip save forced a long-range effort onto the bar late into the second half.

Then, in the last minute, the Lionesses equalised for the second time in the game after a Beth Lumsden free-kick deflected into the back of the Spurs net to seemingly rescue a point.

However, Spurs ended up having the final say, through another ex-Lionesses player, seven minutes into injury-time when Rianna Dean pounced for the winner.

“When we played this team earlier in the season they put eight past us and we looked like an amateur side if I’m honest.” Phillips said.

“But [Sunday] shows the merit and the belief of this team that we have now come to a stage where we have taken them to the very last kick of the game to get a winner.”

The referee had added five minutes on after Lumsden equalised in the 90th minute.

Phillips said: “With five minutes added on, with a goal to go in in the 97th minute of stoppage-time is kind of frustrating as well.

“You look at the last two weeks and we have played the team at the top of the league and the team who are fifth in the league. I don’t think if you watched either of those games you would have thought that.

“The girls work ever so hard in training, so it’s just as a shame for them that we’re not getting the results we deserve at the moment.”

After three 8-0 defeats in the first half of the season, the Lionesses look to have restored some defensive resilience as they have only lost by one goal against Leicester City and now Tottenham.

Phillips praised stopper Sansom. “I think she has done very, very well. To be fair, the sort of chances they had, we reduced them to not-easy chances.

“Yes, her hands were good, but I think it is [credit] to the team in front of her that have made her job a lot easier.

“We will have to look at the tapes to see what went wrong for the three goals and work on it in training.

“We’ve not been able to name the same defence two games in a row at the moment because of injuries and other circumstances around the team. It is hard because with a defense and a goalkeeper you want to try and keep some consistency and unfortunately we’ve not been able to do that.”

Clarke’s goal was her third in two games. Phillips added: “Evie is another one who puts the work in. She has to balance playing for us and her university team where she is on a scholarship.

“She is having to manage two games a week at the moment and again she comes out and turns it on for us.”

The Lionesses’ next fixture is at Princes Park in Dartford against Lewes FC Women in the FA Cup on February 3. Kick-off is 2pm.