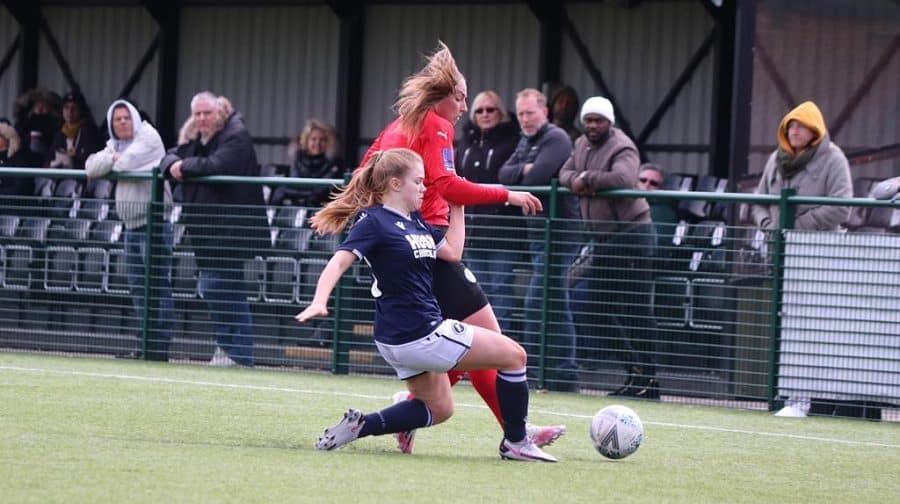 Fans are back at St Paul's to watch live football

Whitmore felt that her young side created opportunities to attack, but aside from a solitary effort from Shannan Drewe, the Lionesses posed little clear-cut goal threat.

Billericay Town play two tiers above Millwall, and some of their first team featured against the Lionesses.

“We’ve got to see it that we did score and we did go on the attack, so we were creating opportunities, but we just didn’t really take them much today,” Whitmore said.

“Whereas with Billericay Reserves, you can see they were quite clinical and they’re passing the ball around quite nicely. Unfortunately, we just didn’t do it today, whether or not the girls put added pressure on themselves for whatever reason, which they didn’t need to do, it just wasn’t necessarily working for us.”

Millwall were 2-1 down at the break in unfortunate circumstances, but a change of formation for the hosts at half-time had an unintended effect as it resulted in more offensive play from the Essex-based side, and the Lionesses conceded five more goals in the second half.

“I listened to the players and what they felt they needed. I listened and it didn’t work. But, as manager, I take accountability for that, as that decision came from me.

“I should have kept the formation as it was, but again, like I said, we just weren’t clinical enough with our end product.”

Lionesses striker Abbey Dell worked tirelessly throughout, but she struggled to really test the opposition goalkeeper.

Whitmore, though, praised the effort and work rate of her centre-forward saying.

“The last two games, you can really see we’ve not been able to give Abbey Dell any kind of product to work on,” Whitmore said. “We’ve not been able to feed into her and she’s been running her socks off pressing, but I can’t ask for much more from Abbey in the sense of what she does off the ball.

“It is something we need to work on [as a squad], whether it is at [finding] the back of the net or finding Abbey Dell, the girls need to get better at doing it.”

Another player who was commended for her efforts was goalkeeper Millie Carter, who pulled off a string of superb saves prevent a worse defeat.

Whitmore applauded the young goalkeeper’s ability. “We say it every week about Millie Carter, we could have lost by a lot more today based on performances and I say it to the girls every time that there are ten players in front of my goalkeeper, and it goes through ten players before it gets to my goalkeeper.

“She saved us a lot, we could have lost by a lot more and I think she is a superb goalkeeper.

“She shouldn’t lose her head in the sense of being disheartened with her performance, because a lot of the time it does not come from her individual error. It’s a squad error that she unfortunately has to deal with and being a goalkeeper, that does come with that added pressure.

“She steps up every week and she bounces back every week, and you can’t fault her for that.”