Millwall Lionesses boss: ‘We’ve gone through a lot of pain – but we know what we’re building here’

The Lionesses face a daunting task against Liverpool this weekend 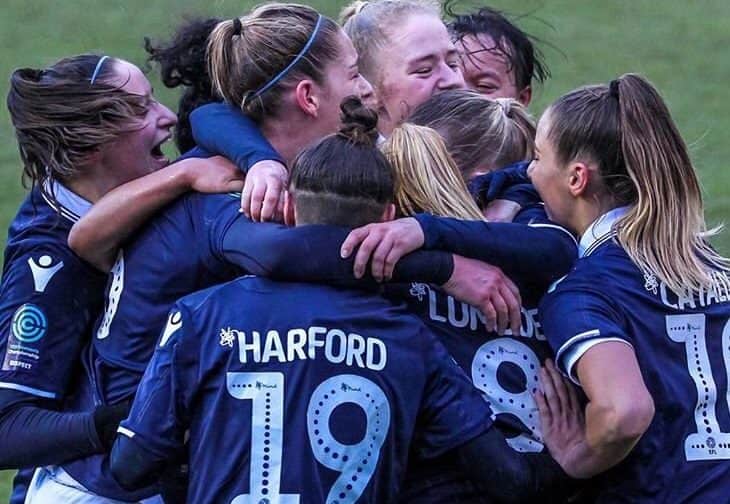 CHRIS PHILLIPS hopes that his side will take confidence from achieving their first victory of the season after a last-minute Grace Neville strike gave the Lionesses a 1-0 victory in their FA Cup fourth-round fixture against Lewes FC last weekend.

Millwall retained the same rigid defensive structure that was evident against Leicester and Tottenham Hotspur in recent weeks, limiting Lewes to a handful of half-chances in the opening exchanges.

The first real opportunity of the game fell to Lewes just before the 60-minute mark. Millwall stopper Chloe Sansom managed to get down low to deny Sophie Perry after she shot from outside the penalty area.

The game looked to be heading for extra-time, before Neville produced a moment of magic with a venomous half-volley in the 90th minute to send Millwall into the fifth round.

“It feels fantastic and I’m just pleased for the girls, the staff and for the club because a lot of work has gone in to lead up to this point.” Lionesses boss Phillips said.

“You look at the men’s game against Everton and it was exactly the same. For me there is ever only one statistic that matters and that’s the score. Whether you have the majority of possession or not, if you win games then who cares?

“The girls have gone through a lot of pain this year, but we knew what we were building here and we knew a win would come. Like I said in my programme notes, in the last two games we have deserved something. This win has been coming.”

The celebrations on the touchline matched those on the pitch when Neville’s strike hit the back of the net as Phillips and his staff could not contain their delight at clinching their first victory.

Phillips continued: “I think [Francesca] Ali actually accidentally punched Sinead [Boyer] in the face by mistake and I’m trying to calm everyone down, but on the pitch you have to let the girls enjoy these moments.”

Neville’s goal was her first for the club after signing for the club in January, following Phillips from Arsenal’s development squad.

“It was great technique,” Phillips said. “I have known Grace for a number of years now and she has great technique. She has adapted well to a new position because historically she has played at right-back, but we have moved her in at centre-back and she hasn’t looked out of place at all. I’m really pleased for her to get her first Millwall goal.

“The girls will take confidence [from the victory], for sure. I have been trying to instill that into them. I could see the improvements in this team but obviously it’s hard when you’re not getting positive results to give them that belief in themselves. Hopefully the win will give them belief so we can kick on for the rest of the season.”

The Lionesses travel to Merseyside this weekend to face a Liverpool side who are eighth in the Women’s Super League for a place in the last eight of the FA Cup.

Phillips said: “It will be [a tough game], and we do not have a long time to prepare. So we will have the girls in for recovery and then Wednesday and Friday it will be training as normal as we study the tapes and enjoy a trip up to Liverpool.”

Kick-off is 2pm on Sunday.

Southwark NewsSportMillwall Lionesses boss: ‘We’ve gone through a lot of pain – but we know what we’re building here’