'If I get the opportunity to wear the armband I’ll be following in the footsteps of some fantastic players, so I’m very proud' 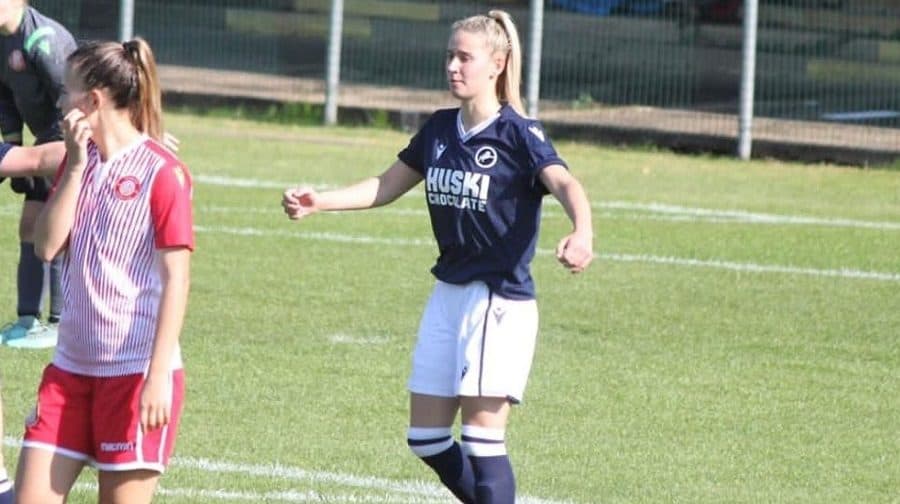 Millwall Lionesses striker Abbey Dell has been confirmed as club co-vice-captain for the 2021-22 season.

Dell, who joined the club last season from Harlow Town, has been one of the Lionesses’ star players and is noted for her leadership and attitude on and off the pitch. .

“The reason behind Abbey being given the role of vice-captain, it’s not taking anything from club captain, Libby Stubbs, or co-vice-captain, Sian Fitzpatrick, if anything it’s adding a great addition to already great team-work,” Lionesses boss Katie Whitmore explained.

“Abbey is very vocal on the pitch, very positive, a great role model and it’s a good reward for Abbey [after] having such a successful first season with us. It’s quite good in a way that you have Sian as vice-captain in defence, you have Libby as captain in midfield and to have Abbey up top, with the formation we play, it’ll be good to have someone in each of the units as that voice.

“Abbey was really positive with the news when we asked her to take on the role. She settled in fantastic for her first season here, especially with it being such a stop-start season. She’s really positive, she’s a great role model, she supports everyone in the squad and they support her.

Although given a position of authority within the squad, Whitmore believes that Dell does not need to add anything to her game or leadership influence.

The manager also highlighted the work she has done in the community during the Covid-19 pandemic as another example why her team-mates look up to her.

Whitmore said: “I don’t want to see much change from Abbey both on and off the pitch, as she has done what we need regardless of whether she has had the title of vice-captain with Sian.

“She has done so much off the pitch, she’s seen quite a bit on social media with our fans, she gets involved with events off the field like the Santa Dash and dropping the presents at Lewisham Hospital at Christmas.

“She’s always been involved off the pitch as well as being a role model on the field. I don’t think that will change and, if anything, Abbey will just do that even more within this role.”

Millwall are aiming for promotion next season.

“I definitely think our core of captains will help with the push,” Whitmore said. “We’ve got three captains who are all on the same page and they are all here for the right reasons.

“They are here to play football, football is their focus and that’s when the results will come.”

“It feels great, I’m very honoured,” she said. “Millwall is a huge club with great history in women’s football. If I get the opportunity to wear the armband I’ll be following in the footsteps of some fantastic players, so I’m very proud.

“It did come as a surprise, I wasn’t expecting it, to be honest. My friends and family are very proud and have been very supportive to me.

“My team-mates have been great ever since I came to the club, so to have the opportunity to lead them out one day will be a fantastic feeling.

“I can’t wait for the new season to start now. I will bring experience, leadership, determination, enthusiasm, energy and passion on the pitch.

“Hopefully a few more goals and wins for the team, too.”