'Towards the end it was very heated, as it was a very tight, close game, but I’m very proud with how the girls conducted themselves' 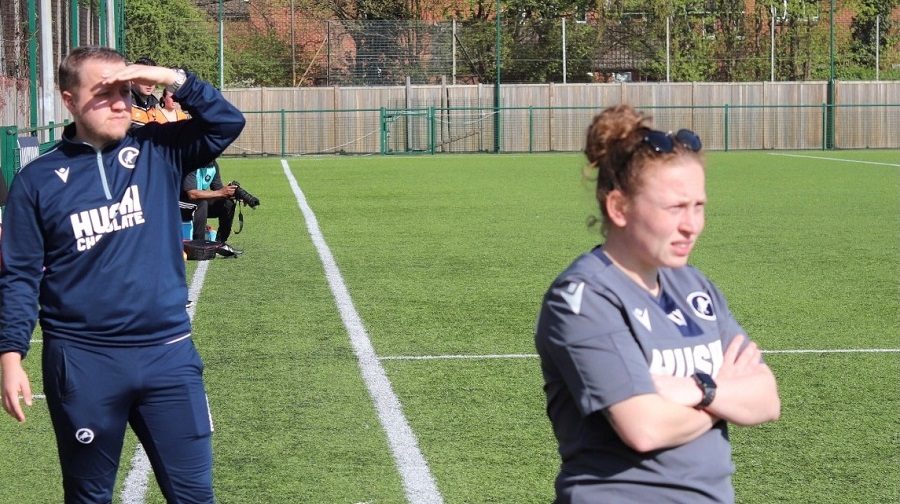 Millwall Lionesses boss Katie Whitmore felt her team held their own against West Ham United Academy in last weekend’s 3-3 friendly draw at St Paul’s – but was disappointed the hosts gave away two late goals as they couldn’t hold on for the win.

Two goals from Shannan Drewe – including a superb long-range free-kick – and a strike from Abbey Dell put Millwall 3-1 in front after they had fallen behind.

But the Women’s Super League academy team recovered to claim a draw.

“The first half was great,” Whitmore said. “I think the intensity was there, the togetherness was there. We were creating opportunities, creating chances, we were defending well and we looked like we weren’t panicking.

“But then in the second half, we did look like we were panicking, and I think that’s what cost us the two goals to allow it to be 3-3. I think we showed we were panicking on the ball, and not really wanting to protect it and do anything with it.

“Our team is young, but they are a younger team in comparison and I think for us, what could’ve worked in our favour is more maturity with their footballing ability, and I don’t think we necessarily used it.

“I think towards the end you could see we were very tired, whereas they probably used that to their advantage slightly, as they had a lot of possession at the end of the game. I think that’s based on our fitness letting us down.”

Lionesses back-up goalkeeper Larissa Miller impressed after coming on in the second half for Millie Carter.

Miller has struggled for game-time due to the impressive form of Carter.

“It’s always hard [being No.2], we have conversations with Larissa about minutes and today she got to go on, which was great to see,” Whitmore said. “There’s always that added pressure when it is such a close game and a tight game, but she made some superb saves and we can’t fault that.”

As would be expected of a Millwall-West Ham derby – and despite the game being a friendly behind closed doors – there was plenty of niggle.

Whitmore added: “Towards the end it was very heated, as it was a very tight, close game, but I’m very proud with how the girls conducted themselves. They didn’t get caught up in any of the heated moments, they did their challenges and parted which was good to see, and that’s a positive to take.

“The girls’ mentality is in the right place and their maturity really showed.

Millwall’s run of recent games against higher-tier sides including Kent Football United, Billericay Town Ladies Reserves, Aylesford and the Hammers has fired the ambition of the sixth-tier Lionesses.

“We want to play at a higher level, of course we do,” Whitmore said. “[Assistant manager] Alex Russell and I have discussed that we want to recruit players that when we get to that next level, it’s not a shock to the system for them when they play there.

“So for us, we are learning just as much as they are by playing these bigger names and I think it’s a good opportunity for us to test ourselves as managers, and to test the players as well.”