Millwall Lionesses will continue to give youth a chance next season 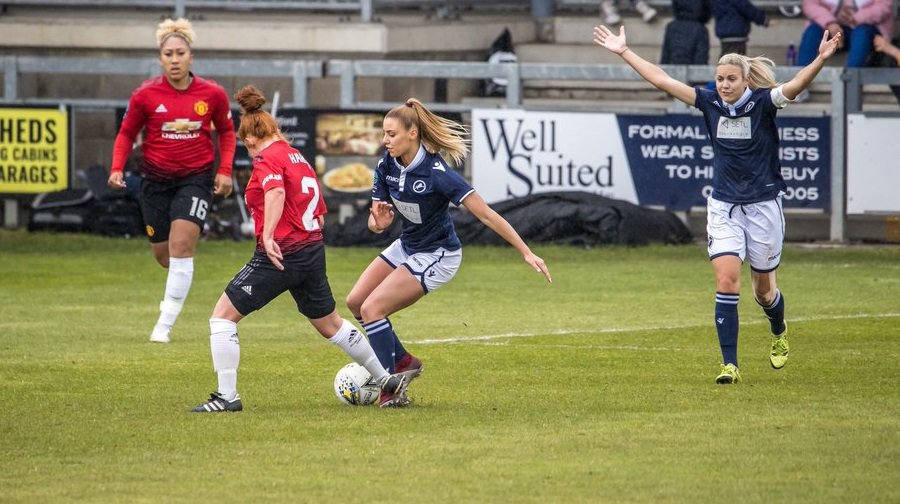 MILLWALL LIONESSES manager Chris Phillips revealed that his side had achieved all three of their season’s objectives despite losing 5-0 to champions Manchester United at Dartford’s Princes Park last Sunday afternoon.

The gulf between the two sides was apparent, with Manchester United going 4-0 up inside the opening 30 minutes in the Lionesses’ last Women’s Championship game at home this season.

After dominating possession for large parts of the half, ex-Lioness Charlie Devlin tapped in from six yards to add a third, before Amy Turner found herself unmarked in the box from a corner for the fourth.

The Lionesses improved in the second half by holding their shape which frustrated the champions. The hosts’ Evie Clarke looked dangerous on the break but it was United that extended their advantage in the 77th minute when Jessica Sigworth headed home from another corner to make the score 5-0.

“Let’s make no bones about it, Man United are a Women’s Super League side and they have been all season.” Phillips said.

“It shows the sort of level of difference between where they are and where we are. Hopefully next season with us moving to a full time schedule we will be trying to close those gaps.

There were questions over Manchester United’s two early penalties in the stadium and Phillips explained that he shared the crowd’s discontent.

“If I am honest, I do not think either of them were penalties,” he said. “I did not see the contact from Lia on the first one, I see the player sort of dive into her.

“The second one was a great tackle. Two of the other goals came from corners, so you are looking at a side that has only scored one against us in open play today.

“That shows the progression in this side, but also shows the work that needs to be done.”

Phillips has opted to start sixteen year-old Rhiannon Stewart between the sticks for three consecutive games, and again the youngster showed her potential against the league leaders by producing a string of impressive saves.

Phillips added: “She is unreal. I don’t see how she is not in the England set-up. I have not looked, I think she still qualifies for the England under-16s, but they must have some worldies if Rhiannon is not that set-up.”

Despite a number of improved performances in the second half of the season when they got their first league win, the defeat to Manchester United means that the Lionesses will end the season at the foot of the table despite having one more game to play.

“If you are looking at the season, I see progression and that is what I wanted to see this year.” Phillips continued.

“We had three objectives this year, and that was to be the best side in the country for offering young players first-team football. With an average age of 18, I think we definitely achieved that.

“We wanted to have a club that was financially sustainable, and we have done that by coming in under budget this year. I think there has been progression more so off the pitch, but also on the pitch as well.

“I looked at the start of the season at bringing in development-team football, and it took them up until December to learn this level. From the Arsenal game onwards I saw a different team that understood, was willing to fight and willing to work hard.

“I have got to praise the players and the staff around them for that progression.

“We are not a Chelsea, or any Super League club that has a massive budget and we also do not have the pressures to be qualifying and winning trophies.

“We will still aim to be the best at something, and that will be providing young players, and especially young English players an opportunity to get first-team football in the Championship.”