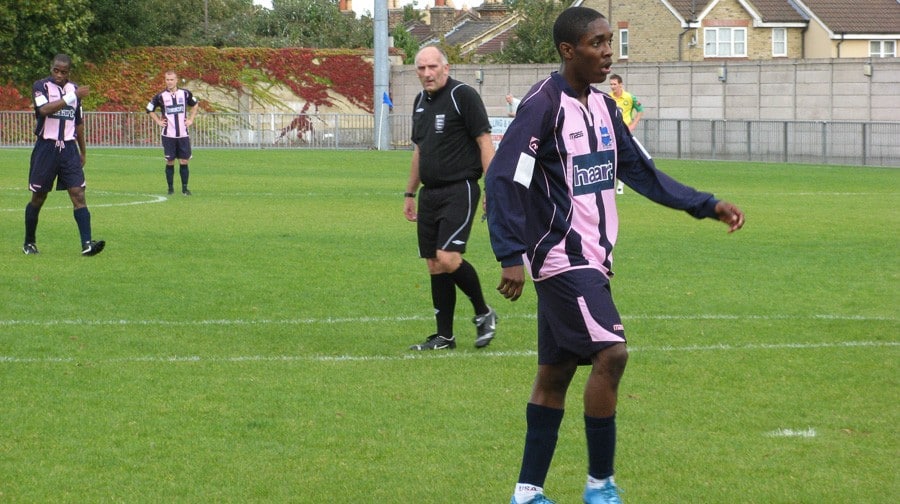 A Charlie Moone goal was enough to stop Dulwich in their tracks on Saturday after the euphoria of the win over Margate last week.

The result the previous weekend saw Hamlet complete the double over one of the pre-season title favourites.

But last Saturday was a different matter and a pudding of a pitch meant Hamlet had to adapt their usual passing style.

They still created first half chances with Nyren Clunis hitting a post coming closest, but five minutes before the break Moone latched onto a long ball, turned inside the box and beat the dive of Phil Wilson to score the only goal of the game.

Hamlet worked hard and pushed for an equaliser in the second period, but it did not come despite the visitors dominance throughout the second 45 minutes.

Centre half Ethan Pinnock told the News: “It was disappointing. We go into every game to try and get three points.

“The pitch was difficult to play on. But we should have recognised that and changed accordingly. We did at points but at other times we didn’t play to the conditions and played as we normally do which was difficult on that surface.

He added: “Sometimes you have to compromise the way you play and we didn’t do that enough on Saturday.”

On Tuesday night Hamlet got back to winning ways when they travelled to Enfield Town and came away with a 1-0 win, with Serge Makofo netting on his debut.

The victory took Dulwich to second place in the Ryman Premier League above Margate who have two games in hand on the Champion Hill side.