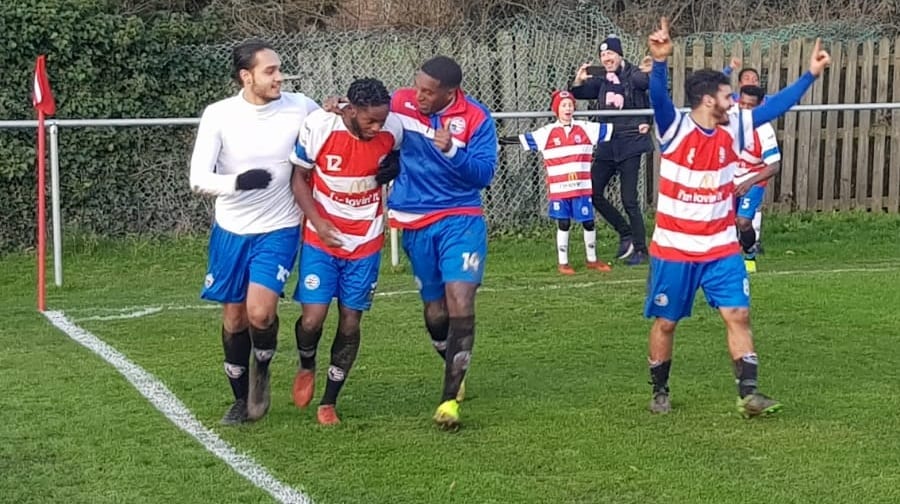 Moses Abioye, second from left, celebrates with his team-mates

Peckham Town manager Mary Phillip praised the local support and said she was “proud” of her team after their epic comeback from three goals down against Hill Top in the quarter-finals of the London Senior Trophy last weekend.

Abioye gave the Menace hope before half-time to make it 3-1 after the visitors had raced three goals clear.

After Phillip’s half-time team-talk, the Hoops immediately put Hilltop under pressure and created numerous chances roared on by the Menace Ultras.

Abioye soon struck for his second of the afternoon to reduce the deficit to a goal.

Hong then sent Dance through and he was taken down in the box to give captain Meta the chance to level from the penalty spot. Meta saw his effort saved but Abioye pounced on the loose ball to make it 3-3.

In the 88th minute, and with no extra-time in the competition meaning penalties were looming, Hong found Dance again and the wing wizard went past three players before firing home the fourth and send the home fans into ecstasy.

Phillip said: “We had a few forced changes to our planned line-up, so players had to step up. Nevertheless we begun well taking the game to them, but the boys took a while to really settle into what I wanted by which time we were three down.

“I knew their team scored goals but I saw that they also leaked goals and I told our lads this was not over by a mile at half-time.

“I’m proud of our young team who are beginning to find their feet, and I want to say a special thank you to the people of Peckham for coming out to support us.”