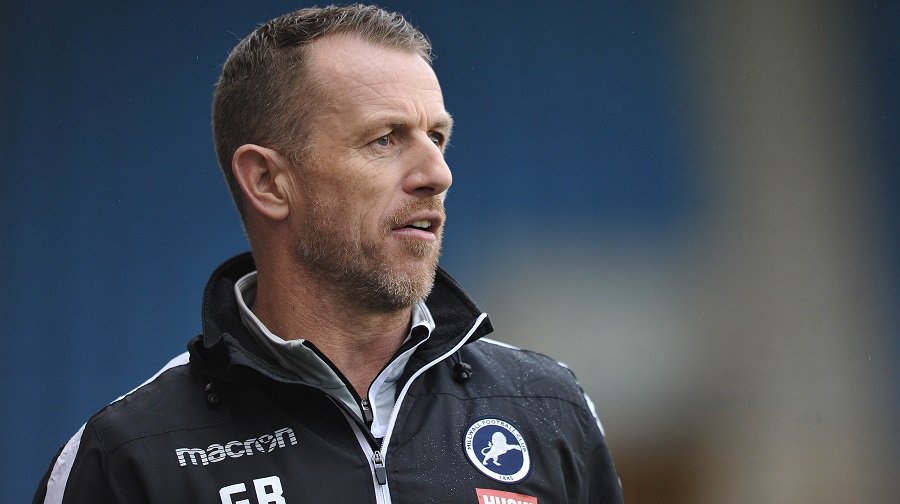 Gary Rowett got off to a perfect start as Millwall boss last weekend when goals from Ben Thompson and Jed Wallace secured three points against Stoke City.

There was a clear difference in how Millwall played, particularly in the first half, compared to before Rowett took over. The Lions were crisp with their passing and looked to pass the ball out before resorting to the longer ball option.

The Lions got their rewards for their patience before the half-hour mark, when Ben Thompson fired in a Jed Wallace cross for his first of the season.

Wallace doubled the lead in the second half from the penalty spot after he was fouled by Badou Ndiaye.

Jayson Molumby and Shane Ferguson returned in place of Matt Smith and Aiden O’Brien from the 2-2 draw at home to Cardiff, with the Lions lining up in a 4-2-3-1 formation.

It was clear there was a different game plan from the outset, with Millwall looking to keep the ball on the floor and pass their way out, even when they were on the edge of their own box.

Wallace and Mahlon Romeo were linking up superbly, causing the Stoke left-back Bruno Martins Indi problems. Stoke seemed surprised at this approach from Millwall and barely made it out of their half in the first 20 minutes.

Another notable aspect of Millwall’s game plan was their intent to keep switching play and they nearly opened the scoring twice in as many minutes with both Jed and Murray Wallace curling wide from similar positions.

Those signs were not enough warning for the Potters, as Thompson’s first-time flick found the far corner. It nothing less than the Lions deserved.

The first half fizzled out a little, with Stoke having only one effort, through Ndiaye’s 25-yard shot that went harmlessly wide. That summed up the first half perfectly with the Lions dominant, but Millwall don’t do things easily and it felt a second goal could be required. Stoke switched formation at half-time with James McClean coming on for Scott Hogan and ex-Lion Lee Gregory playing as the lone man up front.

Gregory struggled to make in impact due to the excellent defensive work of Shaun Hutchinson and Jake Cooper, the centre-backs who looked very composed throughout.

Gary Rowett said in his post-match press conference that the pair “should be comfortable with balls coming into the box”. There was one let-off for the Lions, though, when Tom Ince’s cross from the right fell invitingly for Gregory, but Hutchinson reacted superbly to clear the ball and deny his former team-mate an almost certain goal.

Moments later, Cameron Carter-Vickers crossed from the same side but the ball just evaded Gregory and McClean, with Bart Bialkowski claiming it.

The Potters had clearly decided to target Millwall’s left side and Murray Wallace in particular, after his relative lack of pace had been exposed at times by Luton and Brentford in the previous two away games.

Shane Ferguson, who had been booked, was withdrawn for Connor Mahoney to offer Wallace more protection. Jon Dadi Bodvarsson also came on for Tom Bradshaw in the 70th minute. The Welsh forward had demonstrated his hold-up play and link-up play well in his time on the pitch, but he failed to add another goal to his tally after five in his previous four games.

After weathering the Stoke onslaught for the opening 25 minutes of the second half, the Lions doubled their lead.

Jed Wallace collected the ball in his own half and beat three men, before Ndiaye caught up with the flying winger but was only able to scythe him down in the box.

Wallace recovered his breath after that lung-busting run and dispatched the penalty emphatically into the top left corner.

Rowett joked after the game that he was “surprised he had enough energy left to take the penalty”. He added: “It also settled us down and we saw the game out fairly comfortably.”

Rowett was right, after Stoke’s only other attempt on target had come in the 87th minute when Sam Vokes’s header looped straight into Bialkowski’s hands. The goalkeeper had very little to do all game, aside from claiming a few crosses. Catching practise for someone of his quality.

“We did a lot of work to switch [play] to counter Stoke’s diamond and first half it worked really, really well,” Rowett said. “We got Mahlon out into space and Mahlon was a threat.

“First half the intensity, the front-foot attacking, I think the team showed they can play a little bit with some good movement.

It was a controlled performance from Millwall, with Rowett excited about the potential at The Den.

He admitted that there were “bits we did really well and bits we need to work on.” He added: “I want to climb the table quickly, but I do not think there is a ceiling. It’s one game, but there is a lot of potential here.”

This has to be music to the ears of Millwall fans. With their form at The Den so solid and the potential to add signings in January, top-half ambitions rather than bottom-half worries should be realistic.