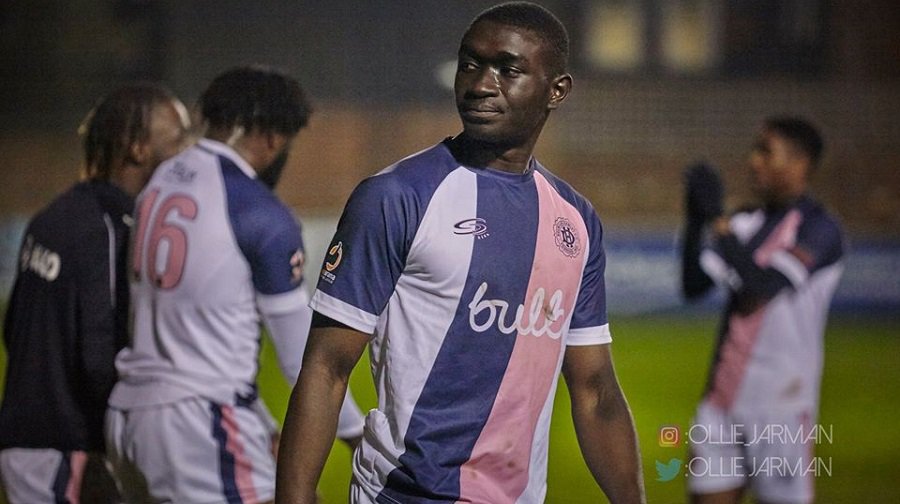 Dulwich Hamlet gave Millwall defender Jesse Debrah a debut as they opened up 2020 with an impressive 3-0 win at Hampton & Richmond Borough on New Year’s Day.

Debrah, who has been on the first-team bench for the Lions, joined on a month loan and slotted into a defence that kept a first league clean sheet since November.

Lionel Ainsworth and Dylan Kearney put the Hamlet two goals up at the break and Nyren Clunis scored in the last minute against the side that had won 2-1 at Champion Hill on Boxing Day.

The result moved Gavin Rose’s side up to sixteenth, four points above the relegation zone.

Dulwich were indebted to goalkeeper Charlie Grainger early on as he twice saved efforts from Ruaridh Donaldson.

It took 30 minutes for the Hamlet to have their first shot on goal as Quade Taylpor’s attempt was easily saved by Dan Lincoln.

The visitors went ahead four minutes later when Kearney crossed from the right and Ainsworth volleyed home his first goal for the club.

Dulwich doubled that lead in the 37th minute as Shamir Mullings darted forward to cross from the left and Kearney scored for the fourth consecutive game.

Ryan Hill, who looked the hosts’ most dangerous player, had a chance to equalise before half-time but volleyed off-target.

Hampton, who were in the top half of the table before kick-off, made two substitutions at half-time as they tried to find a way back into the game.

They almost managed to halve the deficit in the 51st minute when some desperate defending by the Hamlet denied Tyrone Lewthwaite and then Hill. The game was then held up and the players sent to the dressing room after one of the assistant referees picked up an injury. A replacement was eventually found and the game resumed, with Debrah impressing in defence to help keep his side’s lead intact.

Lewthwaite and Hill were at the forefront of their team’s effort to reduce the lead, but they couldn’t test Grainger, who then saved from Charlie Wassmer.

And it was Dulwich who made sure of the points deep into a lengthy period of added-time when Dominic Vose sent in a low cross from the left and Clunis finished past Lincoln.

Grainger mopped up a free-kick from Hill and then dived to his left to deny former Millwall midfielder Kyron Farrell.

The Hamlet could have made it four, but Lincoln prevented Clunis from getting a brace.

Rose’s side face Braintree Town on this Saturday. Kick-off is 3pm at Champion Hill.