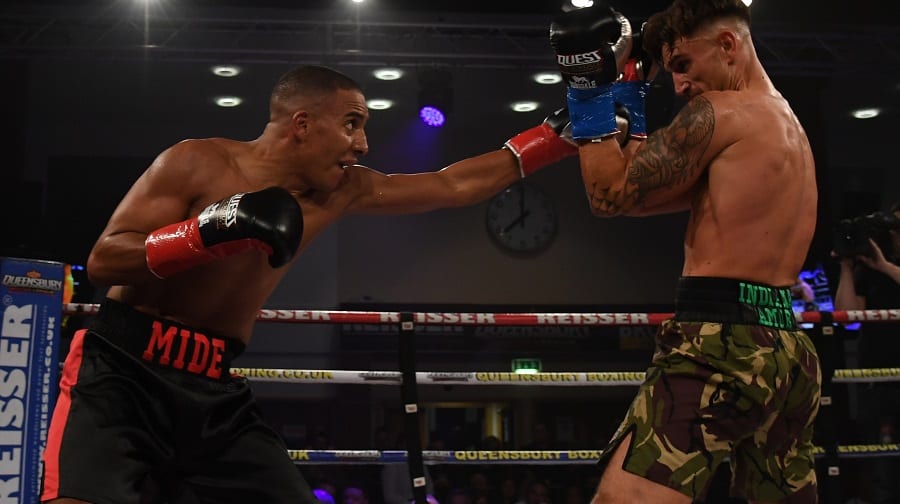 REGIONAL MIDDLEWEIGHT champion Olamide Dedegbe questioned the judges’ decision after crashing out in the first round of the Quest Knockout Tournament – and will consider his future in the Queensbury Boxing League.

Dedegbe met Tucker, who had come down from light-cruiserweight to compete in the tournament.

From the opening bell it was a clash of styles. Tucker was the aggressor coming forward while Dedegbe worked on the back foot scoring well with jabs to the body and head.

In the second round Tucker landed with a right-uppercut and forced the champion back. Working in close, however, Dedegbe continued to land left hooks.

The third and final round was a dramatic and electric affair as both boxers exchanged heavy shots in close without eeither man landing flush. Dedegbe momentarily slipped to the canvas but he got to his feet and both fighters traded blows until the final bell.

After the fight went to the judges’ scorecards, Tucker was awarded the decision and went through to the semi-final, where he would be defeated.

Dedegbe explained why he believed he should have been given the decision.

“I think I performed well against a rangier and stronger fighter,” he said. “But I landed shots, he didn’t land with much. He may have caught me once or twice but I thought I did the better work in there all throughout the three rounds.

“I’m being told the second round was closer than I thought, but the first and third were not even close.

“I’m always going to respond on emotion and I have no idea why it went to him. I feel like there are maybe fighters in the competition who have a certain standing and maybe that’s what plays for them.

“If you’re a hard puncher [like Tucker] and you come forward maybe they feel that’s pressing the action. But you actually need to score, because that’s not always doing the better work.”

Dedegbe will take time to digest the performance and result.

He added: “I need to re-watch it and be a bit calmer. I’ll be in the gym on Monday. I’m always in the gym – not only is it my job but I enjoy what I do.

“In the league I really need to sit and think about what I’m going to do, as I don’t enjoy being on the wrong end of a decision that I don’t agree with. I really have to think about whether it’s the best option for me.”