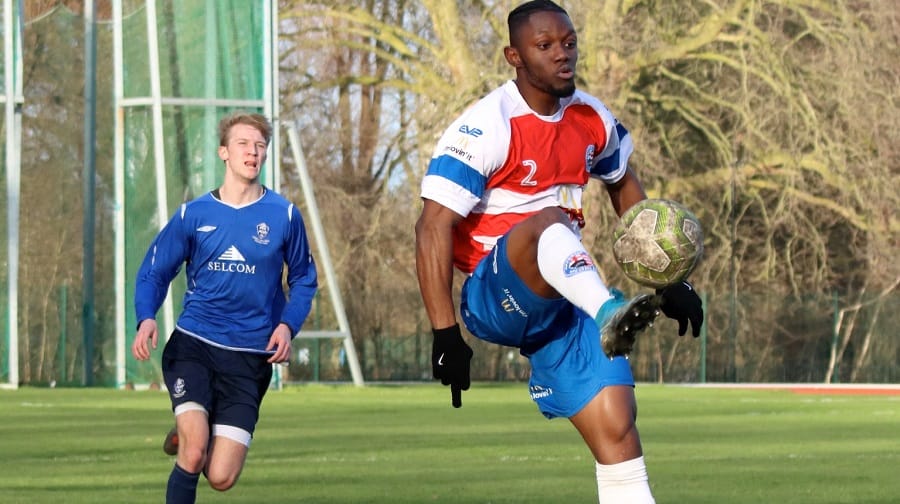 The Menace grabbed a late winner

Ten-man Peckham Town scored two minutes from time against Forest Hill Park last weekend to reach the final of the London FA Trophy for the first time in their history.

In the 88th minute against their Lewisham rivals, Marcus Black took advantage of confusion in the home defence to fire into the roof of the net and ensure Southwark representation in the showpiece final.

It was all the more impressive after manager Mary Phillip had to make late changes to her starting XI as Moses Abioye and Yaya Barry both failed fitness tests. Abioye had scored a hat-trick in the previous round to turn around a 3-0 deficit to a 4-3 win against Hill Top.

Peckham, backed by around 40 travelling Menace Ultras, almost went behind when the referee played advantage after the linesman had raised the offside flag. Town goalkeeper George Legg was charged down and the visitors were relieved to see the ball come back off the crossbar.

That unsettled Peckham and Legg made a good save to keep the ‘Battle of the Boroughs’ contest level.

The Menace stepped it up after the break and the increased tempo of their play made it difficult for their opponents, who had to defend stoutly.

Phillip’s side then suffered a blow when influential midfielder Norman Hong was given a straight red card for a reckless challenge.

But Black popped up with that dramatic late winner.

Phillip said: “Everything we did out there we did it ourselves. We used what we had in us to get the job done and I’ve said it before that I’m so proud of these lads.

“I want to thank the people of Peckham for their continued support, and to Forest Hill Park for a good game and first-class hospitality.”

The final will be played on Tuesday, March 31, with a 7.45pm kick-off. Full details of tickets and the venue will be published by the London FA, and will also be found on Peckham Town’s website and social media.