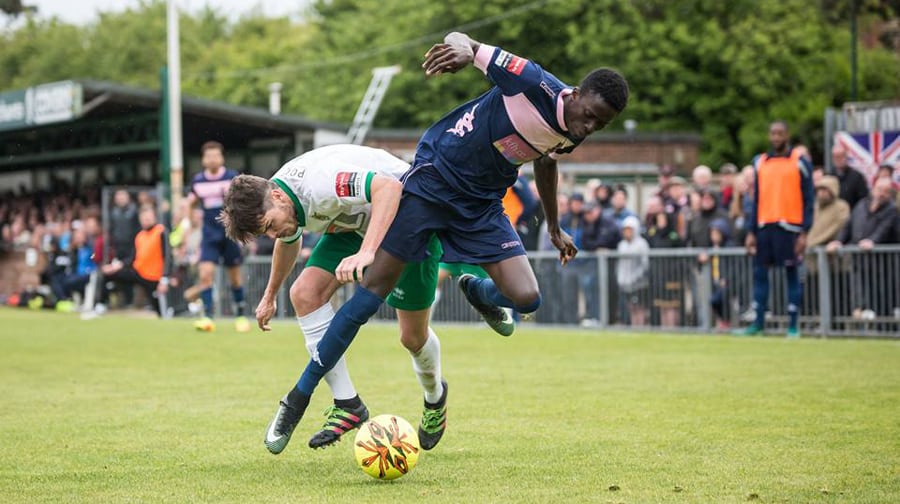 DULWICH HAMLET’S season ended in disappointment at the final hurdle in their bid for promotion to the National League South.

Hamlet face another season in the Ryman League Premier Division after losing 2-1 to Bognor Regis Town in Monday’s play-off final.

Despite making a bright start Gavin Rose’s side fell two goals behind and couldn’t rescue the game after Ibrahim Kargbo halved the deficit in the 77th minute.

It was their second successive play-off defeat, as Bognor Regis, who finished the season second, stepped up to the sixth tier of English football. Ibra Sekajja fired wide in the opening stages before the home side’s Sami El-Abd twice went close with headers.

Hamlet’s Gavin Tomlin then saw his shot saved as Hamlet attempted to take the lead. Tomlin went close again moments later but Hamlet were behind 21 minutes in when Ollie Pearce set up Jimmy Muitt for a tap-in.

It was Tomlin again doing his best to get his side back into the game when he fired a free-kick towards goal after half an hour, but Jamie Howell’s side were relieved that the ball went just outside the post.

Bognor stopper Dan Lincoln palmed away a free-kick from Ashley Carew before the Sussex side dealt Hamlet another blow in the 42nd minute. Hamlet’s Matt Drage had the chance to clear but mis-cued and Pearce took advantage by beating goalkeeper Preston Edwards with a precise finish.

The Dulwich side struggled to create anything in the early stages of the second half, and it was the Rocks who almost made it three but Edwards stretched to tip El-Abd’s header over.

Bognor looked like they would finally put the game beyond their opponents after they were awarded a 63rd-minute penalty for Kenny Beaney’s foul on Harvey Whyte. But Edwards brilliantly kept the visitors in it by saving James Fraser’s strike.

That buoyed Hamlet and they pulled a goal back with thirteen minutes left, Kargbo superbly volleying home from Nyren Clunis’ cross. Hamlet piled forward looking for an equaliser but were left heartbroken when Carew saw a late chance saved.