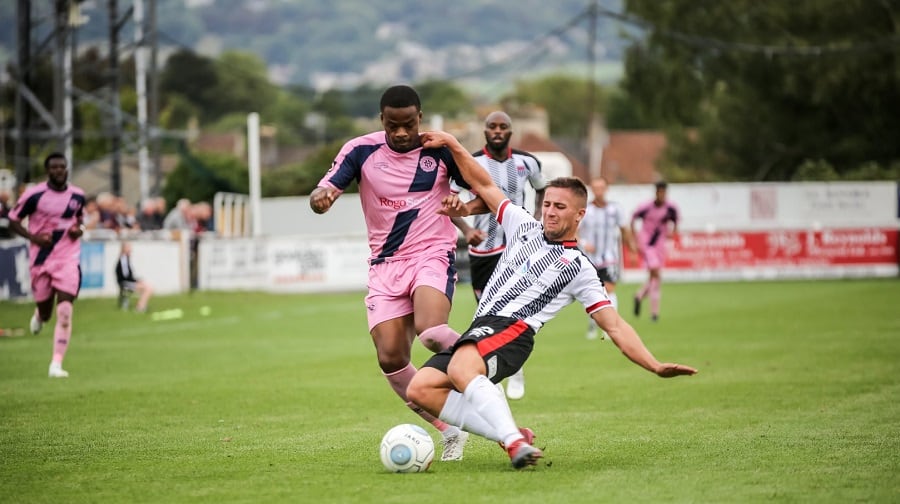 DULWICH HAMLET continue life in the National League South as they host Gloucester City this Saturday at 3pm.

Dulwich will, of course, be hosting their West Country opponents at Tooting & Mitcham’s ground, Imperial Fields, rather than their traditional Champion Hill residence. Stadium woes are shared by both sides – Gloucester have played away from their home, Meadow Park, for over a decade now.

Gloucester visit the capital on the back of a victory last weekend over nine-man East Thurrock, who Dulwich also beat earlier in the season.

Dulwich, meanwhile, fell 2-1 to Bath City last Saturday. However, their first-half performance was lively enough to offer Hamlet fans some encouragement. Furthermore, it should be noted that Gloucester were thumped 3-0 by Bath two weeks ago. So, the game appears finely balanced.

Dulwich supporters and staff have expressed their frustration recently over the side’s seeming inability to turn good performances into results.

Gavin Rose’s side should have been more than a single goal clear of Bath last weekend after a dominant first-half display. However, their early profligacy in front of goal meant that their narrow lead was easily assailed in the second half as the Londoners conceded twice under Bath pressure.

These frustrations were shared by Rose and attacker Anthony Cook.

Rose said: “We’re not clinical, mentally. We had the opportunities to be two or three up. At the moment we seem happy to just score a goal and keep it tight. We need that mental edge to kill the game off.”

Regarding missed chances, Rose said: “I think it goes down to personal standards and expectations in any level of football. It separates people – it’s not all about quality. Sometimes it’s just down to what your personal expectations are as a player, and I think our mentalities have to change up front in terms of being clinical, and it needs to happen immediately.

“We’re not going to win any games if we feel sorry for ourselves or think that the game is over. You need to have a bit of mental strength. It doesn’t always go your way as a footballer. Sometimes a bit of character is all you need.

Cook bemoaned Dulwich’s defending after the break: “We didn’t keep the ball as well as we could have. We gave away two sloppy goals. When you’re away from home you can’t be giving away goals. We have to keep the ball better when we’re under pressure.”

Dulwich will be hoping to build on last week’s positives with a win that could take them into the top ten.