Rabble Rouser: Player of the year and president reflect on season and potential promotion challenge

Hamlet survived in their first-ever season in the sixth tier 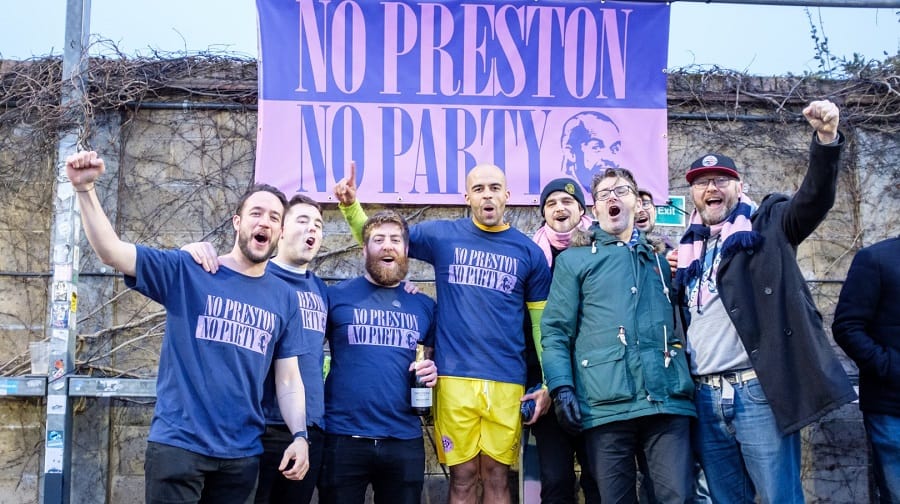 Our Dulwich Hamlet reporter, Ben Henderson, attended the club’s recent awards night and caught up with the president and player of the season for their reflections on the season and how Gavin Rose’s side can improve in 2019-20.

It was an entertaining affair as always at the stadium’s bar. These events provide an eye-opening opportunity to view the players as they truly are, rather than as we see them on the pitch.

However, unless Anthony Cook was doing his best ‘tw*t in the hat’ impression, it would seem that he at least should stick to the club stash.

The awards ceremony began with man of the match awards that had not been handed out during the season. Aryan Tajbakhsh dominated these accolades and he scooped April’s player of the month award; the midfielder has made a huge impact since joining the club in February.

Next came recognition for Hamlet’s youngsters, who were recently crowned champions of the Under-18 Kent Youth League North. The rampant Dulwich whippersnappers netted a phenomenal 81 goals across their 16 league games, scoring at least four in fourteen different matches. The most remarkable result was a 9-0 humbling of Crockenhill Under-18s in March.

The star man from the campaign was Tom Chambers. His contribution was acknowledged with the youth team player of the year award, although he was not present at the bar to collect his accolade.

A particularly touching moment was the introduction of the John Stephens Memorial Trophy, awarded for the best individual performance in a single game.

John passed away in 2017 aged 88-years-old. He had been one of the last living Hamlet fans to see Dulwich lift the old FA Amateur Cup in 1937 at Upton Park. John’s first Hamlet game came during the 1935-36 season and he still made it down to Champion Hill with his son, Cliff, until his passing in 2017. The eponymous trophy was awarded to Nathan Green for his sterling performance in the 2-1 home victory over Welling United on February 9.

Jamie Mascoll won goal of the season for his fantastic volley against Dartford at Champion Hill in March.

Meanwhile, the club recognised the phenomenal off-field effort put in by its supporters this season, without whom Dulwich Hamlet might well have been consigned to history. It was acknowledged that every supporter who contributed deserved a share of the volunteer of the year award.

However, Clare Keeble (Dulwich Hamlet Supporters’ Trust member), Duncan Chapman (DHST co-chairman) and Ben Clasper (DHFC director) were singled out for their monumental contributions of time and resources to the cause.

The highlight of the evening was, of course, the player of the season award. In an inconsistent campaign, there have been few outstanding performers for Dulwich.

However, in the fans’ eyes one man towered above the rest: Preston Edwards. The goalkeeper appeared in 40 of the club’s 42 National League South matches and was a strong performer throughout. He has now made 171 appearances since his club debut in February 2016. This season he even managed make national news through his aversion to parking rules, spawning the chant, “Preston Edwards, he parks where he wants”, which echoed through the bar as he collected his prize.

The evening ended with a typically rousing speech from the club president, Jack Payne. I caught up with Jack and Preston afterwards.

The goalkeeper was in raptures following his recognition. “It means a lot that they think highly of my performances. I’m delighted, to be honest with you. Ecstatic and humbled to win this award.” I put the question to both men whether or not they regarded the season as a success.

Preston replied: “I’d say it’s a 6/10. It’s our first season in the league. To be honest, it’s tougher than I expected. I’ve been playing at Conference South for most of my career and it seems to have gone up a notch.

“After a poor start we did okay in October and November. Over the Christmas period we were awful, but we did alright in the end, particularly with our home form.”

Jack had an equally pragmatic perspective: “This season, I think the target was just to stay in the division so that we can challenge for honours next season.”

Preston emphasised the need for change if Dulwich are to progress next season. “The club will be pushing for promotion. It’s big enough to get promotion. We’re under no illusions that it’s going to be tough. There are some big clubs coming down like Aldershot, Havant [& Waterlooville] and Maidstone. It’ll be tougher than ever.

“I think we need to strengthen. We need more know-how. Sometimes it’s let us down this season. I think we need some more strong-minded players, especially on a Tuesday night away from home when it’s wet and windy. We need people who will just roll their sleeves up and get on with it.”

Both president and player were united on what Dulwich Hamlet means.

Preston continued: “Dulwich is very unique. I don’t think there’s another non-league club like it: the community feel, the amount of fans they get through the door, the families, children, women, dogs. You’re pink and blue, it’s very striking and when you wear it everyone knows Dulwich are in town.”

Jack, meanwhile, could not resist nostalgia. “When I was a little boy, in 1948, I went to the ground further down the hill to see them play. My mate and I used to live just off the Walworth Road and I used to go to John Ruskin Street School. I’ll always remember playing opposite the stand, looking across and thinking, ‘I wonder if I’ll ever be able to afford to get in there?’

“Even when I was managing another team and came here with them, I was always made most welcome by the Dulwich Hamlet officials. So really and truly, I do believe it’s a special place.”

Finally, Jack could not finish without expressing his gratitude to the supporters for the sacrifices they have made to return his beloved club home. The first game back, he said, “was better than having a pint of brandy!”

Southwark NewsSportRabble Rouser: Player of the year and president reflect on season and potential promotion challenge