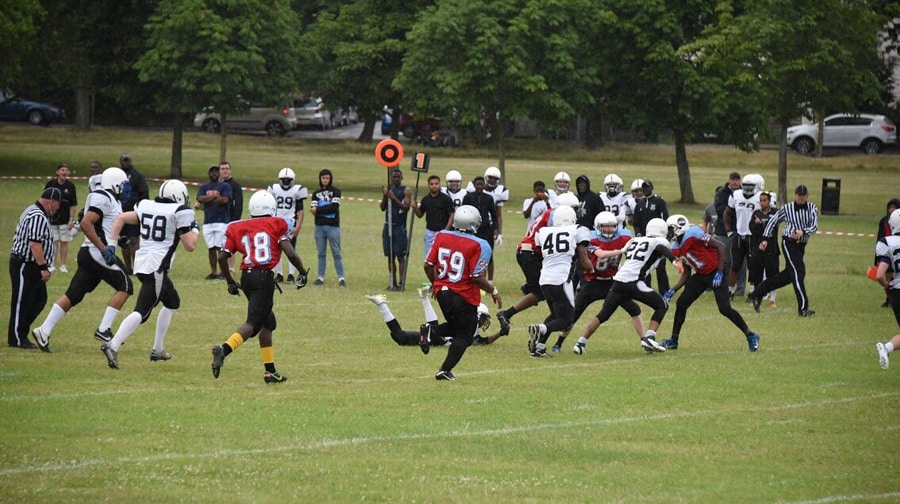 The Renegades won the home fixture, played in Peckham, 12-6 in a hard fought physical encounter.

Both teams needed to win the latest contest. The Warriors to needed to restore some pride after a disappointing season which saw the former number one team struggling to keep up in the Southern Premier conference.

The Renegades needed to bounce back following their narrow loss two weeks earlier to reigning British champions the London Blitz. The weather would be a factor in this game as the rain began pelting down as the teams lined up for the kick off.

Wet weather meant passing the ball was difficult so the Renegades went to work running the ball hard at the Warriors stout defence.

First blood went to the Renegades at the start of the second quarter when fullback Ade Labisi sprinted towards the endzone from 30 yards out, shrugging off Warriors linebackers as he crashed over for the score.

As the weather cleared both teams went to the air but unfortunately for the Warriors Renegades man of the match Kunle Omisakin was waiting and he intercepted a team record three Warrior passes.

The game was put to rest early in the fourth quarter when the Renegades outstanding offensive line opened up a hole big enough to run a bus through and running back Andy Owusu ran through virtually untouched for a 60 yard score.

The Renegades now have one game remaining and are in excellent position to take the second playoff in the Southern Premier Conference. That game is against the Farnham Knights on Sunday, kicking off at noon in Peckham Rye.