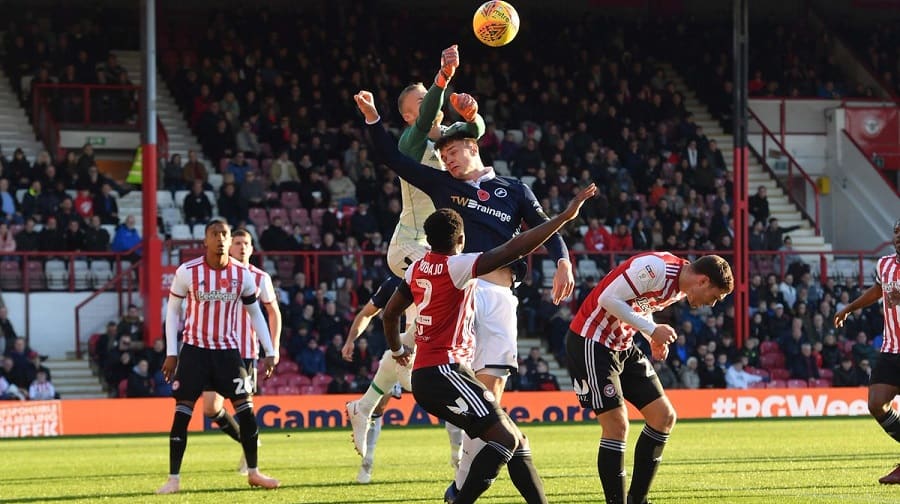 MILLWALL’S search for a first away win of the season goes on after they lost 2-0 at Griffin Park on Saturday.

Sergi Canos gave Brentford the lead after half-time, before substitute Ollie Watkins doubled it late on as the Bees won for the first time in nine league games.

Daniel Bentley had prevented Millwall going in front in the 20th minute with a superb save to tip over Shaun Hutchinson’s header.

Eight minutes later, Brentford winger Said Benrahma cut in from the left and fired a shot off the crossbar.

Brentford took the lead three minutes into the second half when Millwall lost possession in their own half, the ball going through to Canos who had just Ben Amos to beat and he fired low past the goalkeeper’s left hand.

Brentford hit the crossbar for the second time in the 71st minute, this time Neal Maupay seeing his header crash down off the woodwork before Ryan Leonard cleared.

But with Millwall stretched chasing an equaliser, Watkins wrapped up the three points for his side in the 85th minute.

Millwall had won just one in their last six games against Brentford, and the last time they were victorious at Griffin Park was in December 2006 when Poul Hubertz scored twice as the Bees were beaten 4-1.

Both sides were out to end winless runs, the Lions looking for a first away victory this season, while Brentford hadn’t won any of their previous eight in the league.

Most of Millwall’s defensive worries in the first half came down their right, where Benrahma had so much room to attack Mahlon Romeo. Jiri Skalak struggled to get close enough to help the right-back, who time and again was left in one-on-one situations, and breathing heavily in between to recover from them.

Benrahma beat Amos with that superb drive but not the woodwork, as Brentford dominated possession. The winger also bent a free-kick just wide as the hosts kept the visitors pushed back.

Millwall’s best chances before the break came from set-pieces. The Lions were also varying the throw-ins from Leonard, who twice went short to Wallace. From the second, six minutes after that Bentley save, Wallace crossed from the left and Jake Cooper glanced a header just wide.

There was little respite for Millwall’s defence and for Romeo, with Benrahma drifting inside the defender and Skalak before curling a shot wide of the far post.

And yet, for all of Brentford’s probing from almost 70 per cent possession, they didn’t have a shot on target in the opening 45 minutes.

That changed in the 48th minute when Canos tucked home his chance. Millwall had struggled to keep the ball in Brentford’s half for most of the afternoon, and Neil Harris tried to change that in the 57th minute by sending on Steve Morison for Elliott.

Moments later Morison threaded a pass through to Lee Gregory, but the striker’s shot was blocked before the ball rebounded off him and went wide.

Jed Wallace came on in the 64th minute for Skalak, who had had little chance to impress in attack. Wallace fired a free-kick wide but Millwall were far more aggressive in Brentford’s half, literally so when Morison and Henrik Dalsgaard scrapped for possession and after referee Simon Hooper whistled for a Lions free-kick Morison had some angry words for the defender. Shaun Williams played the dead ball square to Wallace, who took a touch before firing a foot wide.

It was during Millwall’s best spell of the game that Thomas Frank’s side almost added a second. Maupay was lurking behind Romeo and connected with Dalsgaard’s flick from a corner, but Millwall escaped.

Millwall’s set-up was close to a 5-0-5 then and it left them exposed in the 82nd minute, when the ball was helped wide to Maupay who went past Hutchinson before whizzing a shot just wide of the far post.

The away side were now leaving gaping holes in midfield, and Watkins made them pay and clinched the game for his side when he ran onto Maupay’s pass to drill low past Amos.

This was a real test of Millwall’s recent resurgence, and of their defensive organisation as Brentford put so much width into their play.

Millwall succeeded in limiting the threat of Benrahma in the second half, and the introductions of Morison and Wallace improved their attack, but only briefly, and Bentley wasn’t tested.

But after Bradshaw came on there was too much distance between the Lions’ defence and attack.

Watkins ensured the points would go to his side with a smart finish, and Brentford could have added more goals late on.

Millwall didn’t deserve anything from their performance, as they lost for a sixth time away from home this season.