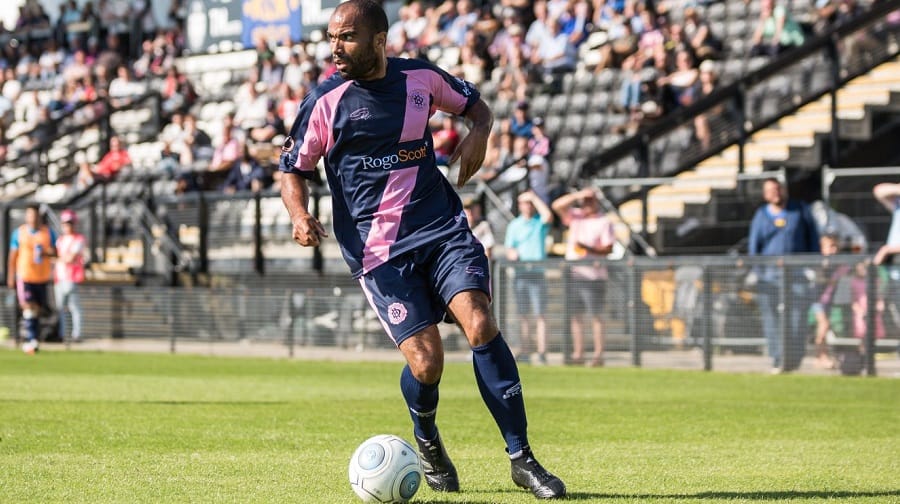 DESPITE A wonderful Anthony Cook strike, Dulwich Hamlet endured a frustrating draw at home to Wealdstone FC on Saturday.

As has been so often the case this season, Dulwich dominated possession and territory for long periods of the game without providing a consistent attacking threat.

In the 20th minute, Wealdstone left-back Freddie Grant sent an excellent cross towards striker David Pratt, whose towering header was palmed onto the bar by Preston Edwards.

Three minutes later, Wealdstone were gifted a penalty through a highly contentious refereeing decision. The ball bounced in the box, enticing Michael Chambers to attempt a clearance. The defender had eyes for the ball and appeared to get his foot on it ahead of the Welling attacker. However, the referee did not hesitate in blowing his whistle and pointing to the spot, much to derision of the Hamlet faithful.

Huson-Odoi made no mistake as his penalty flew into the bottom left corner.

Dulwich manager Gavin Rose would have been hoping for a decisive reaction from his team after the half-time break. However, neither side seemed able to piece together meaningful passages of play as the second period meandered for 20 minutes without incident.

On 67 minutes, Rose brought on Cook for Liam Nash, the striker who had signed on loan from Gillingham last week. The substitution appeared to provide the impetus for Dulwich to push on.

With 20 minutes left, a Dominic Vose corner led to a goalmouth scramble in which Hamlet number 9, Jay May, appeared to be punched by Jonathan North in the Wealdstone goal, but the referee was unconvinced by Dulwich appeals.

Ten minutes later, Cook provided the magic that Dulwich’s attack has been lacking for much of the season. Picking the ball up on the edge of centre circle, the midfielder drove into the Wealdstone half. Initially, he looked too isolated to threaten the opposition goal. But, taking one look up, he rifled the ball into the Wealdstone net from more than 20 yards.

Cook’s strike was the catalyst for a Hamlet onslaught. In the 83rd minute, Ibrahim Kargbo sent a dipping shot just over the bar from 30 yards. The Hamlet camped on the edge of Wealdstone’s box but could not penetrate their well-organised defence again.

Dulwich gave their all to earn the three points, but their frailties in defence and attack were at times evident.

They will hope to build on this point next Saturday at Woking.