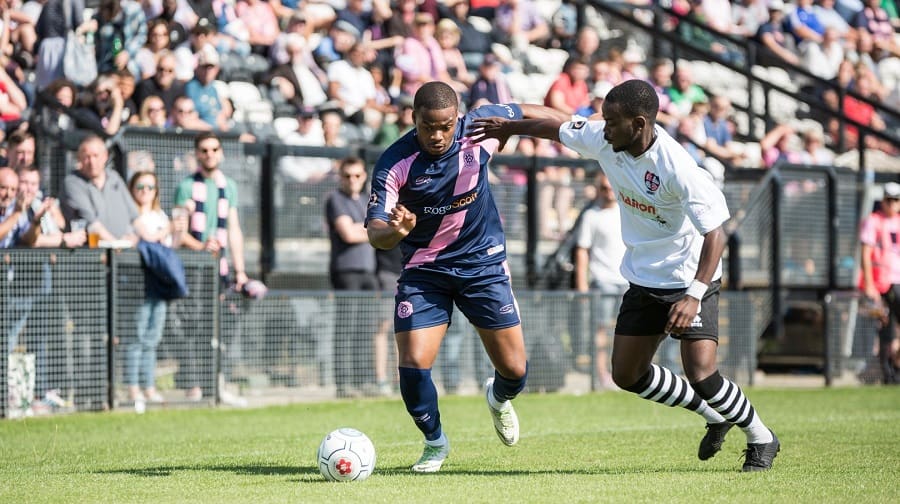 DULWICH HAMLET continued their impressive recent run of form with a comfortable victory over Chippenham Town at Imperial Fields. The victory means Dulwich have only lost one in their last six matches, and will ease their fears of a relegation battle to come.

Dipo Akinyemi scored a second-half double against the high-flyers, to move Hamlet up two places to sixteenth in National League South.

Imperial Fields was bathed in blazing sunshine on Saturday, and it seemed to have an effect on the players, with both sides looking lethargic throughout the opening period. Neither side was able to control the ball well and a mixture of mistakes and unimaginative play characterised the half.

The first chance of note arrived after 25 minutes. Chippenham midfielder Michael Jones cut inside from the right and played striker Nat Jarvis down the right-hand side of the Dulwich box. The number 9 fizzed the ball across the face of Preston Edwards’ goal but no one was able to get a meaningful touch.

Dulwich gifted the away side the next big chance. Quade Taylor took a routine throw-in inside his own half and inexplicably picked out Chippenham forward Nick McCootie. The striker drove menacingly towards Dulwich’s box but he struck his shot just wide.

In the final few minutes of the opening period, Dulwich mustered their first spell of continuous pressure. This culminated in a cute bit of play inside the Chippenham box between Nathan Ferguson and Gavin Tomlin. The latter nutmegged a defender before toe-poking towards goal from close range. However, Brad House in the Chippenham goal was as safe as his name suggests.

Dulwich began the second half with far more impetus. Ten minutes in, Nyren Clunis sent a looping cross to the back post where it was met by Nathan Green, rampaging upfield from left-back. The defender’s downwards header struck the post before the ball was cleared in the ensuing goalmouth scramble.

However, Chippenham’s relief did not last long. In the 52nd minute, Clunis burst down the right again, winning a corner. The delivery ricocheted around the box before being tapped over the line by Akinyemi. Dulwich have recently fallen foul of goal-line decisions, but this time the linesman was unequivocal in awarding the goal.

Dulwich then began to dominate the game, with Chippenham offering little.

After 70 minutes Dominic Vose delivered a great ball in from a corner that was begging to be put away but Green mis-cued the free header wide.

Three minutes later, the game was all but decided. Dominic Kargbo delivered a cross in from the left towards Akinyemi. The forward received the ball facing away from goal with a defender at his back, but he spun around his marker with a beautiful first touch and sent the ball past House. It was a clinical striker’s goal.

In the final ten minutes, Chippenham began to apply pressure. The ball fell to substitute Josh Smile on the edge of Dulwich’s box following a Chippenham corner. He bent an excellent effort towards the bottom corner but Edwards was equal to it – tipping the ball round the post.

In the dying seconds, Dulwich substitute Ashley Carew bent a superb free-kick onto the post shortly before Akinyemi came off to a standing ovation from the Dulwich faithful.

It appears that after a shaky start, Dulwich Hamlet are finally asserting themselves in National League South.