Rose: 'I’m really proud of the boys. Especially in terms of the work rate, sacrifice for each other and being humble' 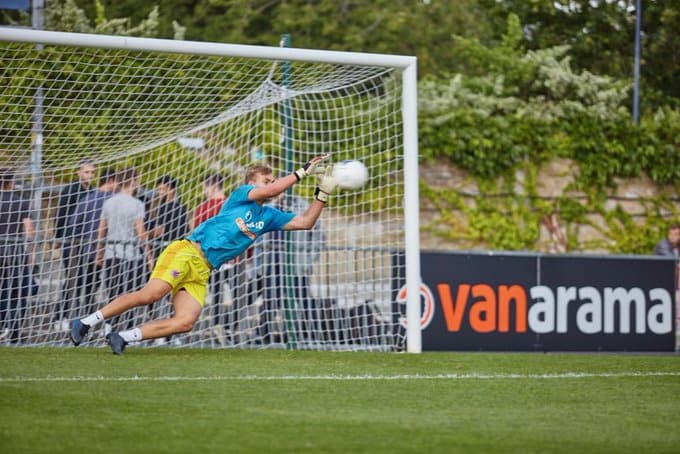 By Ben Henderson at Champion Hill

Dulwich Hamlet overcame a first-half sending off to record a heroic victory over St Albans City at Champion Hill on Saturday afternoon in National League South.

Dominic Vose was harshly sent off after 37 minutes. However, second-half substitute Nyren Clunis scored one and forced a late own goal to give Hamlet three points.

Dulwich have recorded maximum points from their opening three games putting them third in the table on goal difference.

Neither side seemed able to shake off their early season rustiness throughout a first half lacking in quality.

Dulwich came close within the opening ten minutes when Vose intercepted a pass from St Albans goalkeeper, Dean Snedker. The midfielder squared the ball across the face of the City goal but no Hamlet attacker could apply the finishing touch.

Dulwich’s most potent threat during the open period came down their right side through Kieran Monlouis and Aaron Barnes. On the half-hour mark, a beautiful turn from Monlouis in midfield gave him space to release Barnes on the right flank. The full-back cut inside and fed a dangerous cross into the box but the St Albans defence scrambled to recover.

Less than a minute later, following more good work down the right between Barnes and Monlouis, Dipo Akinyemi’s shot was blocked and the ball fell to Barnes. The new signing from Colchester advanced dangerously into the box but pulled his shot wide.

Soon afterwards another defence-splitting pass from Monlouis put Akinyemi in behind but the frontman was slow to react.

The game was brought to life in the 37th minute. Vose reacted angrily to his shirt being pulled by pushing David Longe-King in the throat. The diminutive Dulwich midfielder’s aggression was foolish, while Longe-King’s reaction seemed exaggerated. The 6’2 centre-half fell to the ground but his theatrics appeared to convince the linesman who advised the referee to send Vose off. Dulwich fans protested and Longe-King smirked towards the substitutes’ bench.

Dulwich rallied in the face of adversity in the second half, but The Saints began to exert pressure as the home players tired. City midfielder Iaciofano nipped in behind Jack Connors and Ashley Maynard-Brewer saved one-on-one.

Soon afterwards, Iaciofano squared to Sam Merson inside the Dulwich box and he drew a brilliant reaction save from Maynard-Brewer.

Then, in the 66th minute, Dulwich launched a long throw into the St Albans box. The ball ricocheted back and forth before falling to Clunis, who fired home on his 450th appearance for the club.

Dulwich’s celebrations were short-lived though. A scintillating move on the edge of the Dulwich box set up Iaciofano to slot home from close range four minutes later.

Immediately after The Saints’ goal the game became fraught, with the weather turning from blissful sunshine to a blustery gale. With a man less, it appeared that Dulwich would struggle to hold on for a draw.

However, in the 87th minute, Clunis whipped a dangerous ball in from the left that was diverted into the St Albans net by Saints substitute Merson. Dulwich battled to hold on through the final minutes and the Rabble was jubilant as the sun fittingly reappeared at the final whistle.

Dulwich never looked like a team with a man less than their opponents, after losing Vose early on. They were tight in defence and the midfield of Smith and Monlouis made up for Vose’s absence by covering excellent ground.

However, the attack looked toothless. Akinyemi was taken off at half-time after a lacklustre display. Despite good work from the midfield behind him, he struggled to maintain possession and looked slow to react to the loose ball.

Danny Mills was less disappointing but he failed to influence the game in any meaningful way.

Dulwich’s threat came almost entirely from their wingers and midfield.

The south Londoners have long wished for a reliable goal scorer up front and it looks like the hunt will go on. However, unless Mills and Akinyemi start performing, Dulwich will struggle to mount a promotion challenge without such a player.

View from the dugout

Gavin Rose on Dulwich’s performance: “I’m really proud of the boys. Especially in terms of the work rate, sacrifice for each other and being humble. We showed some key characteristics crucial in any team sport, not just football.”

On the red card: “Dom shouldn’t have done it, that’s the first thing, it gave (Longe-King) an opportunity to play-act. He milked it but I think I would’ve told my player to milk it, to be honest with you.”

Man of the match

Dulwich goalkeeper Maynard-Brewer was named man of the match. The Australian loanee from Charlton Athletic made a number of excellent saves to keep his side in the game and, other than one spilled corner, looked comfortable throughout.

Rose said of the youngster: “There was a period in which he made two key saves. Had they gone in that would have probably won St Albans the game, especially given we had ten men. I thought he was really good – he handled himself well and he was there when he was needed.”

Dulwich’s next match is away at Hemel Hempstead in National League South on Tuesday. The Hertfordshire side are seventh in the table having won two and lost one of their three fixtures so far.