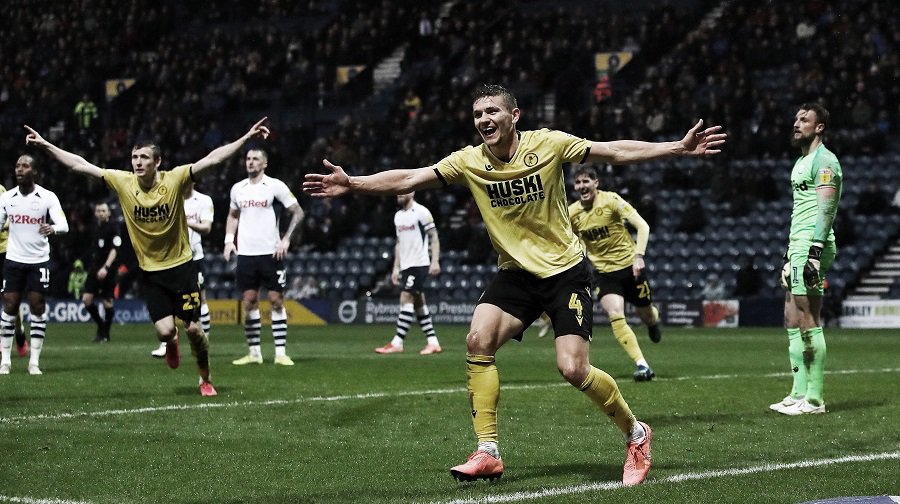 Shaun Hutchinson scored the only goal of the game as Millwall won 1-0 at Deepdale to cut the gap to Preston in sixth to four points.

Tom Bradshaw hit the crossbar in the 62nd minute for the visitors before Hutchinson put the Lions ahead with 12 minutes left.

Millwall dominated the second half to pick up their first league win in five games.

The way Millwall worked their way into this game was as impressive as any of their displays under Gary Rowett.

From being so loose at the back early on and giving away space and easy chances, the away side passed their way to dominating the second half.

Preston had little response and maybe they didn’t recover mentally from not going ahead when they really should have in the opening quarter of an hour.

And the hosts were guilty of poor marking to allow Hutchinson to head home in front of an ecstatic away end. At one stage in the second half the Monk Chant went on and on and that defiance was reflected on the pitch.

Millwall had conceded three goals here last season to leave Neil Harris so furious he didn’t speak to the press after the game. The Lions hadn’t won at Preston since 2004 but they are doing plenty of things with Rowett in charge that they didn’t do before.

It would have been a travesty had substitute Paul Gallagher’s free-kick found the bottom corner in added-time. Instead, Bart Bialkowski, who had had so little to do up until then in the second half, palmed the ball away as the rain poured down.

Millwall got their just reward.

Millwall started poorly and could have been two goals down before they got going.

One feature of the first half was Jake Cooper’s willingness to get forward, on or off the ball. He showed an attacker’s instinct to run off the shoulder of Jed Wallace who found him with a deft flick in the 22nd minute. Cooper had just goalkeeper Declan Rudd in front of him but was on his weaker right foot and the shot lacked the requisite power.

Cooper is more used to having chances in those sorts of areas when the ball is nearer his head.

Hutchinson got that opportunity late on, and his fifth of the season.

Bradshaw’s miss was by no means a sitter. The conditions were difficult and he had worked so hard on his own up front to try to get his side up the pitch.

It was a thankless job early on as the Lions were pinned back, before they eventually took control from Preston.

Bradshaw hasn’t scored in eight games but it would be completely unfair to judge him solely on that. He deserves a goal for the selfless effort he puts in for his side.

Tom Barkhuizen went down in the area in the sixth minute claiming contact from Cooper, but referee Tony Harrington didn’t agree. Moments later Mahlon Romeo produced a brilliant block to deny Scott Sinclair, but the offside flag was up.

Millwall were gifting space to Preston and Daniel Johnson should have scored from Barkhuizen’s cross but shot straight at Bialkowski and David Nugent put the rebound over.

In the 13th minute, Bialkowski was called upon again to save after Sinclair had spun and shot from 15 yards.

Cooper strode into the box in the 22nd minute but on his weaker foot his shot was tame and Rudd saved.

Jayson Molumby’s 30th-minute drive took a deflection and momentarily Rudd was going the wrong way, but the ball was close enough to him and he changed direction to save.

The Lions started the second period positively and after forcing two quick corners Molumby saw his shot blocked in the box.

Johnson’s effort was closed down in the area before the visitors countered and Bradshaw beat Rudd but not the bar as the ball bounced off the woodwork into the away end.

Rudd then saved Hutchinson’s header from Wallace’s corner as Millwall continued to be a real threat.

Jed Wallace needed a better touch, and for the ball to be played a bit more in front of him by Bradshaw in the 71st minute and he would have been through. Instead the Lions retained possession and from Murray Wallace’s cross Bodvarsson flicked the ball up and tried a bicycle-kick but didn’t connect.

Rowett’s side were dominant and deservedly took the lead when Hutchinson was left free to nod home from defender Wallace’s header into the box.

The Lions had a glorious chance to double the lead with seven minutes left when Jed Wallace ran at Preston’s defence before finding Connor Mahoney, but Rudd saved the winger’s effort.

Bialkowski then saved Gallagher’s free-kick before, deep into injury-time, Patrick Bauer went down in the box and wanted a penalty. Harrington wasn’t interested, and moments later blew for full-time as the Lions completed the double over Preston this season.

Rowett named the same starting XI and bench from the 1-1 draw against Fulham on Wednesday.