MILLWALL turn in disappointing performance as their play-off hopes take a hit. 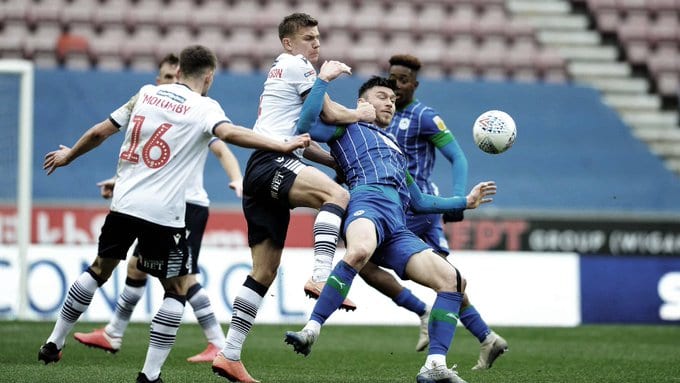 Millwall lost for just the third time away from home under Gary Rowett as Shaun Hutchinson’s own goal gave Wigan three points and a boost in their battle against relegation at the DW Stadium on Saturday.

Hutchinson put through his own net from Anthony Pilkington’s cross in the 57th minute.

The result sees the Lions falling seven points adrift of the play-off places.

Bennett showed really good feet and a turn of pace to go past Joe Williams with 19 minute left but then Jed Wallace lost the ball and Wigan attacked again, which summed up the game.

On-loan Derby attacker Bennett was operating on the left of a 4-4-2 and he gave Millwall a new threat, and Nathan Byrne, who until then had been such an attacking force, something to think about going the other way. Bennett is such a positive player on the ball and he took on Byrne to win a corner that Wigan eventually scrambled away.

Bennett then had his first chance on goal as the ball broke to him 20 yards out, but with the rain teeming down he skewed his effort wide.

And with three minutes left Bennett was certain his attempt from Mahlon Romeo’s shot had come off Cedric Kipre’s hand. But his appeals were in vain as despite his late cameo he and his team left with nothing.

Wigan’s aim was to shift the ball wide to full-backs Byrne and Kal Naismith to overload the wide attacking areas before Jon Dadi Bodvarsson or Jed Wallace could get out to close down.

They were finding particular joy down Millwall’s left in the first half, where Bodvarsson is not a natural wide player. Murray Wallace was booked before the break for fouling Byrne, and twice early on Romeo took down Michael Jacobs.

Wallace’s was one of three Millwall bookings before the break, two of them a consequence of sloppily losing the ball and then having to halt counter-attacks.

As at Preston last weekend, Millwall were slow to get going and were giving Wigan attackers too much room into which to run and shoot.

But Millwall appeared to be denied a penalty a half an hour in when after a lovely flick over Williams and then another to go past Byrne, Ryan Woods was fouled by the defender. Byrne’s left boot looked like it had made contact with Woods’ knee inside the box, but Jeremy Simpson gave a free-kick on the edge of the penalty area.

Jed Wallace shot straight at David Marshall from it, but Wigan would argue the Lions attacker shouldn’t have been on the pitch. Wallace caught Sam Morsy late in the second minute and though it was accidental the colour of the card could easily have been red rather than the yellow Wallace received.

It was almost a dramatic start when Wallace caught Morsy and when Wigan’s players wanted more as Alex Pearce pleaded leniency with referee Simpson.

Kieffer Moore just failed to connect with Pilkington’s right-wing cross to the back post in the tenth minute.

On 20 minutes Latics goalkeeper Marshall let the ball go past him but Kipre got back to clear off the lurking Tom Bradshaw for a goal-kick.

Wallace tested Marshall with a free-kick from the edge of the box in the 30th minute after Woods had been fouled followed by that contentious decision not to give a spot-kick.

Moore shot at Bart Bialkowski in the 45th minute after Jayson Molumby had given the ball away to Jacobs.

Both sides went close within a minute three minutes into the second half as first Marshall dropped the ball to Bradshaw who couldn’t steer his attempt on target, and then Pilkington’s effort deflected just wide of the top corner.

Wigan’s goal came just after Cooper had denied Moore with a brave block and then Murray Wallace cleared off the line. But the hosts sensed this spell could yield something as they kept up the pressure and Hutchinson turned Pikington’s cross into his own net with Moore ready to pounce.

Pilkington fired in a free-kick that Bialkowski pushed away for a corner that led to a scramble in the box with Leon Balogun poking just wide of the post.

It was mostly one-way traffic with Pilkington at the centre of much of it and in the 69th minute he found Morsy moving into the box but the midfielder fired over.

Bennett was off-target with his effort and Smith saw a shot blocked in the box following a corner before Murray Wallace’s 25-yard drive just missed the top left corner.

Moore dragged wide with a minute left and then Bennett drove a shot just off target.

Bialkowski went forward for a Lions corner in added-time, but Wigan defended it and the final whistle was blown.

Rowett named the same side that started in the 1-0 win at Preston last weekend. Bennett and Billy Mitchell came into the squad for Jiri Skalak and Ryan Leonard.