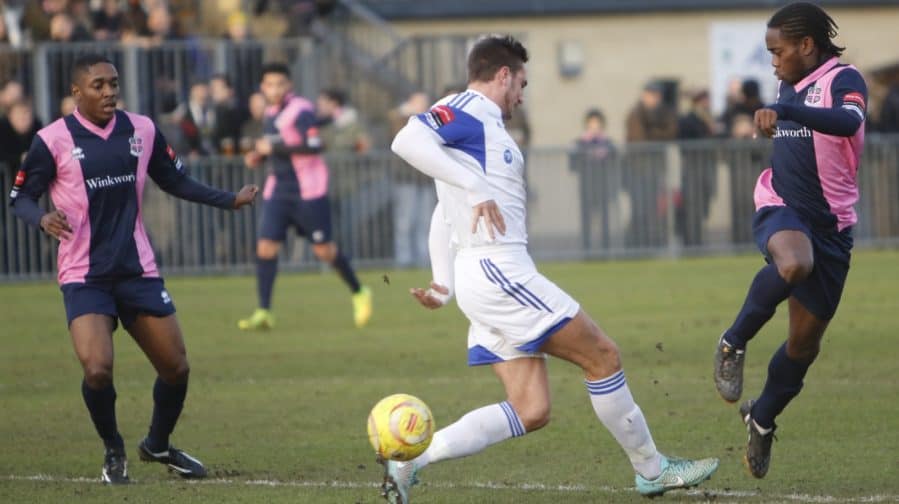 Dulwich have not secured three points since Valentines Day. Pic via Dave Anderson

Hamlet manager Gavin Rose has admitted that his sides slump in form has come at the worst possible time.

The Pink and Blues have not picked up three points since Valentines Day and they are now in real danger of missing out on the play-offs, when at one point this campaign they looked set to be title challengers.

Their latest loss came last weekend away at play-off rivals Wingate and Finchley where goals from Harrison Georgiou, Karl Oliyide and David Knight saw Hamlet fall to a disappointing 3-0 defeat.

Rose told the News: “We are in a run of bad form and it has come at the wrong time of season for us. That will not matter if we start picking up points again.”

He added: “There are lots of factors why we have not been in great form. One thing is the home pitch is not in great condition and is not good for the football we play.

“We need to look at that as a club as we are not helping ourselves.”

Last month Dulwich picked up just two points from a possible twelve, after a similarly disappointing return in February, which leaves them in fourth place in the Ryman Premier League.

But after two month run where form and confidence seems to have deserted Dulwich they are still in control of their own destiny with five games of the season left to play.

Hamlet are four points ahead of the sides who sit just outside the play-off spots, as the teams vying for promotion also struggle with consistency.

The Hamlet boss added: “I think the fact we are still where we are in the league shows that teams around us are also not in great form too.

“It was the same last season in that there are no real outstanding teams in the league and sides are capable of beating each other on the day.

“It also shows that mentality is as important physicality too. In fact it is more important as you cannot perform physically if your mind is not right.”