Rose: Hamlet fans made it ‘intimidating’ for Hendon penalty-takers 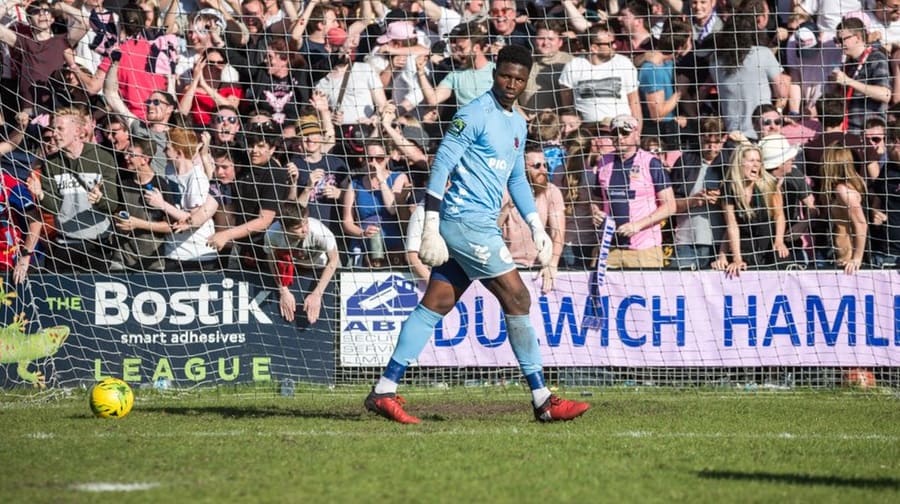 DULWICH HAMLET boss Gavin Rose saw his side promoted to National League South after a penalty shootout – and then revealed his players hadn’t spent a lot of time practising spot-kicks.

Goalkeeper Amadou Tangara saved two of Hendon’s penalties to put his side in control in the shootout after Hamlet had come from behind in normal time when Gavin Tomlin cancelled out Ashley Nathaniel-George’s effort.

Nyren Clunis smacked a shot off the crossbar before Ashley Carew had a late chance to win it in extra-time but Hendon goalkeeper Tom Lovelock saved his free-kick.

Carew, Nathan Green and Anthony Acheampong scored in the shootout before Akinyemi held his nerve in front of the Hamlet end, which was packed to capacity, to send Rose’s side up from the Isthmian League Premier Division.

Rose paid tribute to Tangara, who had been incessantly barracked by the Hendon fans for his mistake in allowing Nathaniel-George’s shot trickle in for the opener.

He also explained the penalty strategy.

“We didn’t really practise penalties, we just went with the five most confident boys,” Rose told the News amid the celebrations afterwards. “That’s the best way to do it and it worked well for us.

“It’s karma, isn’t it? [Tangara] has made a mistake, which is fair enough, but he has shown he has mental strength and character. He stepped up and basically won it for us.”

The game broke the record capacity at the stadium, the majority of the 3,321 supporting Hamlet.

“I’m pretty sure that along with Amadou they did their job putting off the penalty-takers,” Rose added. “In fairness to Hendon they wouldn’t have come up against such a vibrant support base before, certainly not before taking a crucial penalty. That’s the kind of pressure professionals are usually dealing with.

“You can only imagine the intimidation for the Hendon players.”

Southwark NewsSportRose: Hamlet fans made it ‘intimidating’ for Hendon penalty-takers