Rowlett: Callum can be top boss 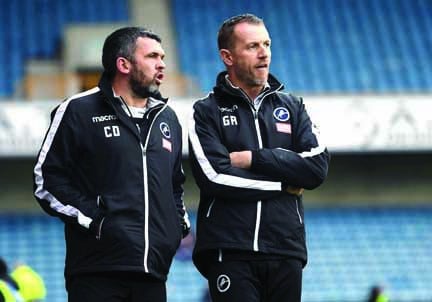 Millwall boss Gary Rowett says he hopes assistant Callum Davidson stays with him at the Den for a while longer – after he emerged as one of the frontrunners to take over at Scottish club St Johnstone.

The pair worked together at Stoke City and now at the Den, having played as teammates at Leicester City. Davidson is a leading contender to take over at the Perth club from Tommy Wright, whose reign ends this season.

Rowett has admitted he is not surprised to see Davidson linked with the job, as he knows he has what it takes to be a top manager.

“The reason he has been mentioned in such glowing terms are the same reasons I wanted him to come and work with me at Stoke and now at Millwall,” he said.

“He is obviously someone I have known for a long time as a friend since we played together at Leicester, many moons ago. We stayed in touch and from the professional side I was aware of how good he is as a coach and how well liked and respected he is in terms of his football knowledge.

“He’s local to St Johnstone and was there for a long time, so it’s a natural link. He would be a fabulous choice.

“From my perspective I want him to work at Millwall and stay where he is and continue the good work we have started.

“But as a mate I’ll also try to push him and help him manage and fulfil his own ambitions, whether that’s as a manager, which I think it will be at some point.

“I think it all comes down to timing and at the moment I hope that timing is not right and he’ll continue doing the good work that we’ve done together.”

Davidson has had coaching posts at St Johnstone, Dunfermline, Stoke and Millwall and was also part of Gordon Strachan’s coaching team with Scotland.

Rowett added: “I knew about Callum’s ability and his character but the big one for me was him almost being headhunted to work with Gordon Strachan and the Scottish national team.

“That was another experience that showed how good as coach he is.

“He’s a very, very good coach. He’s got strong principles and is easy to work with. I think he’s both liked and respected by the players and that’s important. You can have one without the other but to
have both is great.”