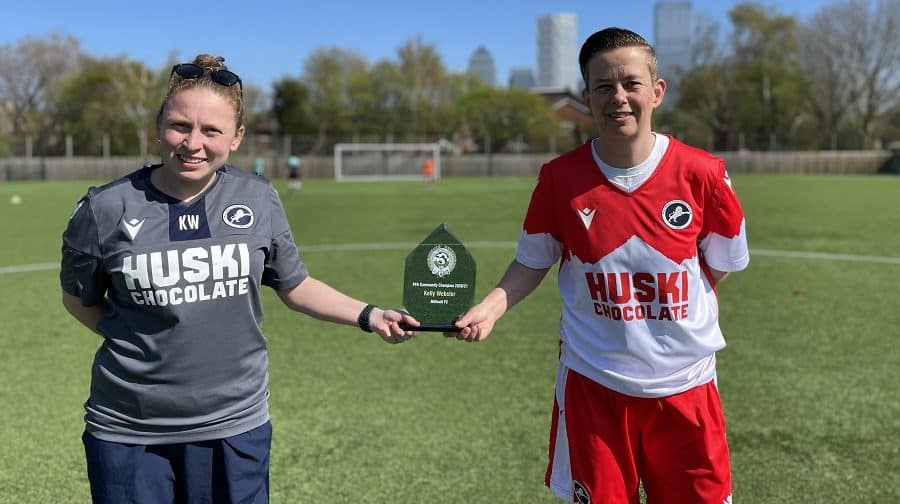 Kelly Webster, right, is presented with the award by Lionesses boss Katie Whitmore

Millwall Lionesses’ Kelly Webster has been crowned the PFA Community Champion for the second consecutive season.

The award was presented to Webster before the recent friendly against Hackney Lionesses at St Paul’s, and recognises Webster’s hard work in the local area over the past year.

“It was a total shock to me to win, and now for two years running,” Webster said. “I don’t do what I do for awards, but it is amazing to be recognised for what I do and win such a prestigious award.”

Webster – who grew up near The Den – gave an insight into what kind of volunteer work she has been doing.

“From January, my fiancée and I manned the staff wellbeing hub at Lewisham Hospital every Sunday for three months – we even spent Valentine’s Day there!” she said.

“I have also set up Lions Food Hub, which is to support anyone in and around the area with essentials like food and toiletries.

“We have had amazing support from Millwall fans, Millwall Lionesses players and staff, and even Ben Thompson came down to donate much-needed items.

“I have to say, without the support of my fiancée Ellen, I couldn’t do all the things I do, so massive thanks goes to her.

“This award means the absolute world to me knowing that all my hard work is being recognised. I am so proud to be a part of Millwall and my community.

“I truly hope that people see what I’m doing and it would inspire them to get involved in the community, or even help a neighbour.

“I really believe volunteering your time gives you a sense of wellbeing and helps your mental health, while also building a better place for us all to live.

“Millwall Community Trust and [CEO] Sean Daly do so much for the community, this is what inspired me and hopefully one day someone will say I inspired them.”

Millwall Lionesses assistant manager and player liaison officer Alex Russell praised Webster for the difference she makes in the community, and highlighted her importance to the squad.

“I am immensely proud of Kelly,” he said. “To win the award once was incredible, but, for it to be her second consecutive time really does show that the incredible work she does in the community doesn’t go unnoticed.

“Players can confide in her with any issues and Kelly can offer advice on how to deal with a situation through first-hand experience.

“[Lionesses boss] Katie Whitmore is hot on having role models amongst her playing squad, and that’s exactly what Kelly epitomises.

“I’m elated that she’s won this award on behalf of Millwall Lionesses, both for her individually but also for the future crop of players coming through.”

Whitmore was thrilled for her player.

“I’m over the moon about Kelly winning this award, it couldn’t go to a greater role model,” Whitmore said. “In my opinion, she’s a fantastic role model for the next generation, she is a role model for her fellow team-mates and the management as well.

“She is very hard-working and I think the award just shows all the work she has done for the community this year.

“Kelly goes above and beyond for her local area. She does so much work behind the scenes at Millwall, like the Lions Food Hub, and she is always there to help.

“She is always a phone call away and is so supportive, and with everything on social media at the moment with the Food Hub, which she is a part of and created, just shows just how much goes on.”

Whitmore added: “I think every player in that squad will know that if they have got something they need to talk about, or they need someone to turn to, they will more than likely turn to Kelly.

“We’ve got quite a young squad, and to have someone like Kelly within the squad and team, I feel very lucky. Very lucky to have that support, even as a manager, and always asking if there is anything she can do.

“She’s a fantastic role model for the under-14s and under-16s and I think it’s really important to have her around the camp.

“It’s fantastic she won it as part of the Lionesses, as she is such a dedicated player and always gives 100 per cent when she wears that badge.

“It couldn’t have gone to a greater player, whose hard work on and off the pitch pays off when you receive an award like this.”