Millwall Lionesses come back from the dead to beat Aston Villa after turbulent week for the club. 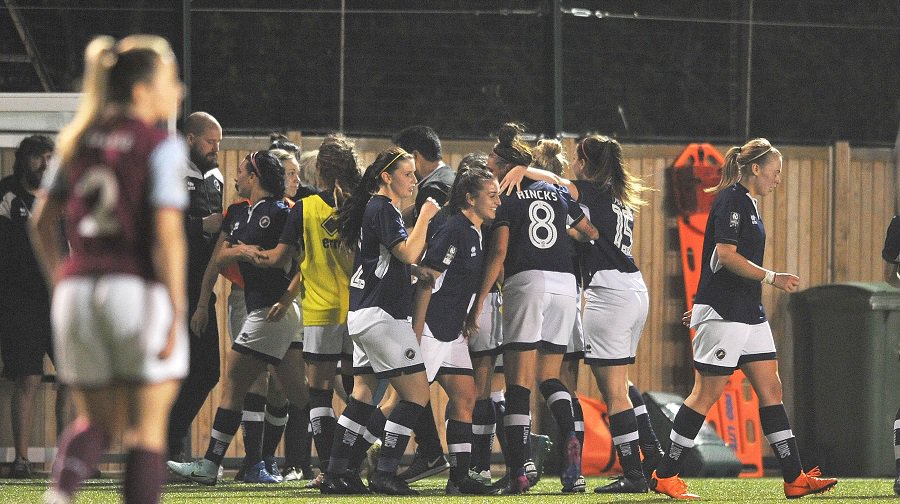 Robe’s free-kick from 40 yards in the 92nd minute drifted over Aja Aguirre and into the net to spark scenes of bedlam in Rotherhithe after what had been a turbulent week for the club.

Villa looked like they would pinch the points – and end the Lionesses’ fourteen-month unbeaten league run – when Ebony Salmon held off Robe’s challenge to fire past Sarah Quantrill with ten minutes left.

But Rianna Dean grabbed an equaliser just two minutes later when she fired home after Ashlee Hincks’ effort had been blocked.

And just when it seemed the hosts would have to settle for a point, Robe saw her free-kick find the back of the net.

It was revealed this week that the club was close to administration due to financial problems, before a Crowdfunding page set up to raise funds surpassed the £10,000 target.

That should mean they can fulfil their remaining fixtures this season, though a long-term solution needs to be found.

For now, though, manager Lee Burch and his players are revelling in a win that moved them to within three points of Doncaster Belles at the top of the WSL 2 table.

Afterwards, Robe revealed her free-kick was no fluke as she praised the resilience of the side.

She said: “It was amazing, especially with the last few days and what’s been going on, to go 1-0 down and come back to win 2-1 in the last ten minutes.

“Emotions are high, but we’re a proud team and everyone dug deep.

“When they went ahead with ten minutes to go, we did start to think, ‘that’s the unbeaten record gone, it’s not our week, it’s not our day’.

“But this just shows what this group of players is about – we said that there were ten minutes left, we’re going to give 110 per cent in every tackle.

“Word-for-word, that was exactly what the manager asked me to do.”

For more on the background to the financial problems affecting the club, pick up a copy of today’s Southwark News.