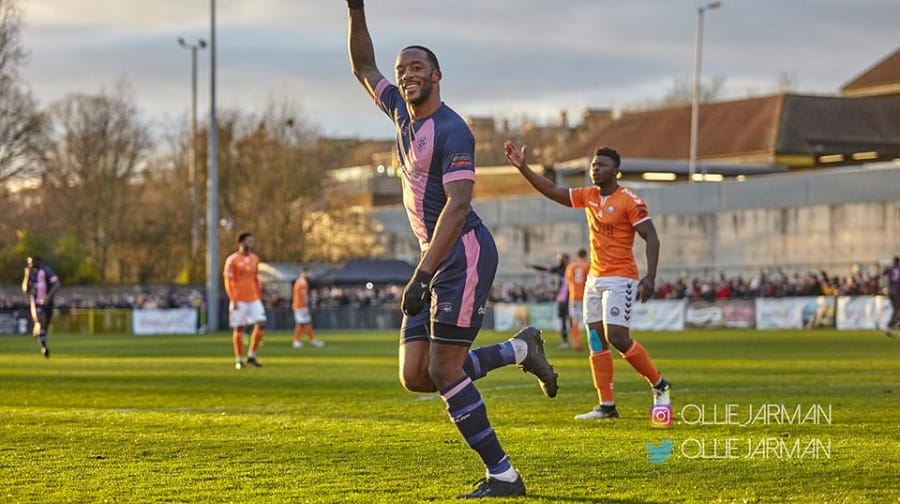 Dulwich Hamlet won for the first time at home in the league since August in the most emphatic fashion as they hammered Braintree Town 6-0 last weekend.

After their 3-0 victory at Hampton & Richmond Borough on New Year’s Day they could hardly have made a better start to 2020 and their trouncing of Braintree lifted them further clear of the relegation places.

They are only nine points off the play-offs but need to show that this mini-revival after such a difficult end to 2019 can be sustained into something more promising.

It was actually Braintree who almost opened the scoring and perhaps the contest would have turned out differently had Jordan Chiedozie’s header gone in rather than bounced off the crossbar in the third minute.

That was as good as it got for the visitors as Gavin Rose’s side went ahead in the sixth minute when Lionel Ainsworth crossed from the left and skipper Quade Taylor headed in to the delight of most of the 2,730 attendance.

Jeffrey Monakana had the next effort for the hosts from Ainsworth’s run and pass but his shot was blocked.

It didn’t take long for Dulwich to go two goals ahead and Ainsworth was yet again involved when he switched play to the right for Ben Chapman to cross to Shamir Mullings who scored his first goal for the club.

And Mullings had his second in the 28th-minute when he latched on to a long ball forward from on-loan Millwall defender Jesse Debrah to finish.

Dylan Kearney – who was aiming to score in a fifth consecutive game – went close to a fourth and Taylor sent a volley wide as the Hamlet continued their attacking onslaught.

Dulwich made it 4-0 on the stroke of half-time when Kearney was fouled in the box and Monakana beat Iron goalkeeper Michael Johnson from twelve yards. The Hamlet showed they were in no mood to let up after the break as they went about further boosting a goal difference that had been minus-1 before kick-off. But Johnson saved Chapman’s shot and then Kearney was denied.

Ainsworth almost got his second goal in two games before the Hamlet made it 5-0 ten minutes from time. It started with David Ijaha’s persistence in midfield as he won possession before finding another substitute, Danny Mills, and the striker ran through to beat Johnson with a composed finish.

The rout was completed in some style two minutes later when Monakana picked up the ball on the left before cutting infield and curling a superb shot into the top corner.

It was the Hamlet’s biggest win in the sixth tier.

Rose’s side travel to sixth-place Weymouth this Saturday. Kick-off at the Bob Lucas Stadium is 3pm.