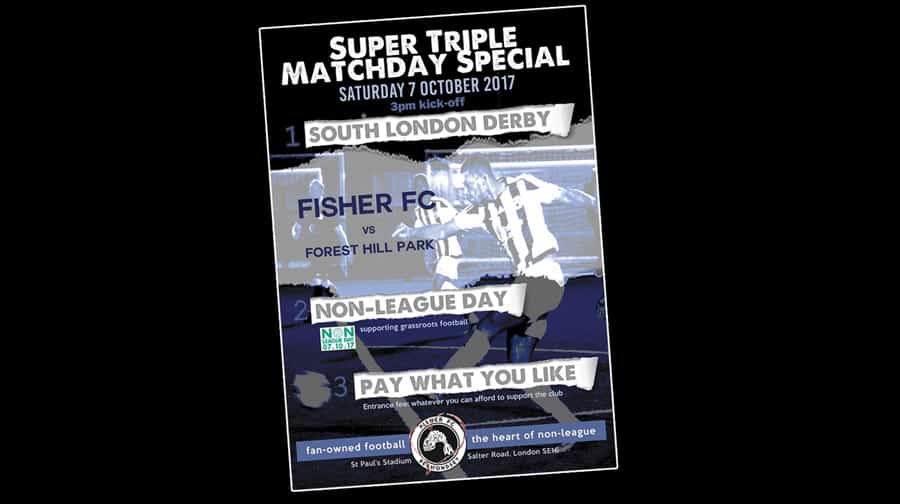 FISHER ARE through to a second-round clash with Lordswood in the SCEFL Challenge Cup after an extra-time 2-1 win over Kent Football United on Tuesday night. Jamie Brown put Fisher in front after ten minutes but soon went off injured, Trey Small coming on.

Fisher led at the break and Ritchie Hamill almost doubled the advantage but saw his shot crash off the post. Kent equalised through Nick Gonsalves to take the game into the added period, before Small popped up with two minutes to go to steal the winner. That made it three wins in a row for the Rotherhithe-based outfit.

After a comfortable victory in the FA Vase the previous weekend, Dean Harrison’s side travelled to Sutton Athletic last Saturday.

Fisher were fast out of the blocks and took the lead ten minutes in when Dan Bowden ran onto a pass over the top of the home defence to flick the ball over the advancing goalkeeper and into the net. Bowden got his and Fisher’s second in the 36th minute. Toyo Adeshina picked up a loose pass before beating his man down the right and crossing for Bowden to fire home from six yards.

Fisher continued to dominate but with ten minutes left Sutton pulled a goal back from the spot through Chris Mirlees after the visitors handballed. Harrison sent on Cameron Stevenson and Pat Geddis, who was making his Fisher debut. Stevenson did not take long to make an impact, playing a pass over the top of the defence for Brown, who took the ball down deftly on the right-hand corner of the box before crashing a shot beyond the helpless goalkeeper. The result leaves Fisher seventh in the SCEFL

First Division table after their fine recent form. They have lost just one of their last eleven fixtures in all competitions after two defeats in their opening two league games of the season. This weekend, Fisher face local rivals Forest Hill Park at St Paul’s. The club are participating in Non-League Day, an initiative running across the country to boost attendances. A club spokesperson said: “The main thing is it’s Pay-What-You-Like which will hopefully encourage more neutrals and first-timers to attend St Paul’s.

“Obviously as a south London derby it’s going to be an entertaining day of football and we are enthused to be participating in the Non-League Day initiative.”