Millwall Lionesses went over a year without losing a league game. 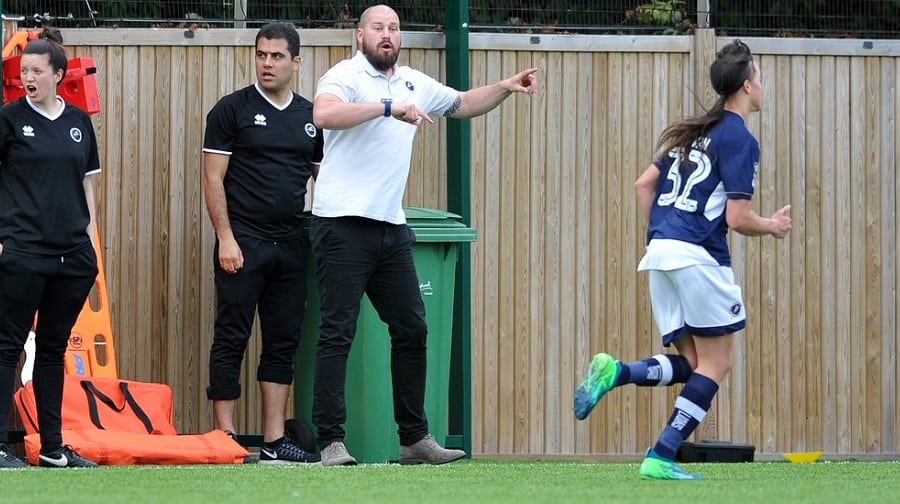 Burch was presented with the away by England men’s boss Gareth Southgate at the League Managers Association Annual Awards Dinner on Tuesday night.

The Lionesses went more than a year unbeaten in the league and were in the title hunt for the majority of the season, despite having three points deducted for an administrative error after their first game.

Burch’s side lost 1-0 at home to the Belles, who are this season’s league champions.

That defeat was the Lionesses’ first in the league at home since February 2017. The Lionesses have also had to deal with changes to the league structure and licencing that would have denied them promotion anyway, and with financial problems casting doubt on whether they would be able to complete their season.

The club had to crowd fund to raise cash for their trip to Durham last month, where their long unbeaten run came to an end.

Burch has been proud of performances this season despite last weekend’s result.

“It was a bit heart-breaking because I thought we played really well,” Burch said. “We had a right go and then they just had a little purple patch towards the end of the first half.

“We came out of the blocks really well, the first half an hour we were the better side. Unfortunately we’ve missed some really good chances and that’s been the difference.

“If you miss chances against a really good side like them they’re always going to get some and unfortunately in the second half the goal slipped through.

“But I was really pleased with the performances, including the subs that came on. Against teams that win leagues you’ve got to put your chances away.

“I haven’t said this season we were the better side when we lost, that’s the first time. It’s a bit heart-breaking after everything we’ve been through and we now head into a tough one next weekend.

“Some of the performances this season have been excellent over all. I can’t pick out individual moments, the lead-up until the off-the-field difficulties was pretty much spot on.”

The Lionesses’ last league game of the season is at Brighton this Sunday, May 20. Kick-off is 2pm.