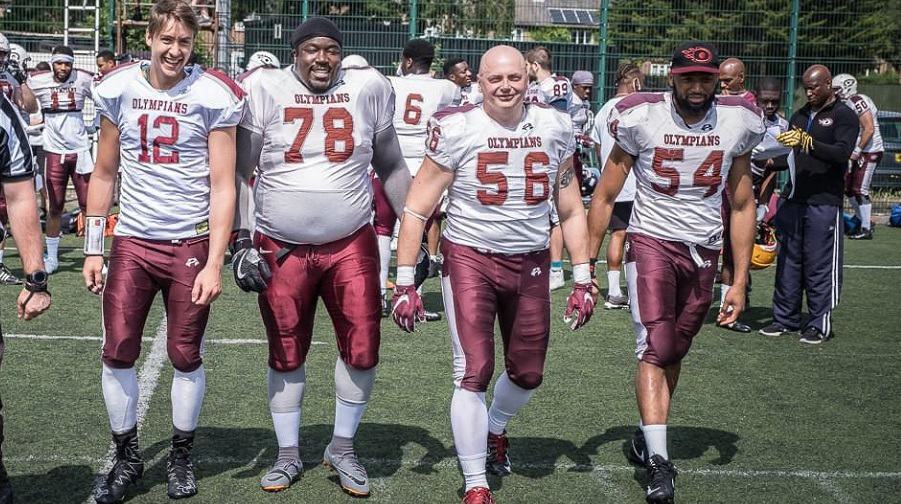 Southwark British American Football club, London Olympians, are back in training after a “damaging and prolonged period of stagnation” during lockdowns left them with an “uncertain future” and the difficult challenge of rebuilding.

The Burgess Park-based outfit, who have played Premiership South League games in Peckham Rye, are the most successful British American Football club in the UK but haven’t played a match since July 2019 as the following season was cancelled with the country responding to Covid-19 with various restrictions around outdoor activities including sport.

But the club didn’t put everything on hold and recently announced that NFL Hall of Fame Rod Woodson had become their official club ambassador.

The British American Football season usually runs from May until September when they Britbowl is played, the biggest prize in the sport in the UK.

The club are hoping this season can get under way in June.

“Our very survival now depends on our ability to successfully resurface and re-launch crucial activities, including player recruitment, finding and funding training facilities and investing in a programme of recovery,” the club said.

“There is no question that being part of the London Olympians family through this time has provided a vital level of support to players and coaches as we are all working through the many challenges that the pandemic has brought to everyone in their own family and personal lives.

“Over the last twelve months, we have held webinar and Zoom chats with the team to maintain unity and keep our spirits up – and had to bounce back from a few false dawns, thinking we were getting back to playing, only to have everything lock down once again.

“Despite all this, amateur grassroots clubs like ours are facing an uncertain future. We now seek to re-establish and rebuild both our club and communities and look to overcome one of the most difficult challenges we have ever undertaken as a club – our path to recovery – and give the opportunity for hundreds of young people to compete in a sport that many in the UK have only ever dreamed of playing.”

Olympians head coach Tariq Ayub added: “It goes without saying Covid has really impacted people who use physical activity as a discipline.

“There is nothing better than team sport to give you structure, support and camaraderie. The discipline and challenges of American Football keep you engaged and focused in all aspects of life.

“Sport is therapeutic and a great equaliser in life”.

Meanwhile, the players are eagerly anticipating reengaging with the sport and their team-mates and coaches.

Ivo De Greef, a linebacker for London Olympians who lives in Canada Water, said: “I’m really looking forward to getting back to playing and training with my team-mates again.

“The great thing about American Football as a team sport is how unifying it is. No matter how many differences players may have, we’re all the same on the football field. We go through the emotional highs and the emotional lows together. You get to know the other players on a deeper level and as people, not just athletes.”

David Simon, another linebacker from Surrey Quays, believes the club will emerge stronger from the lockdowns.

“The team started on a new process in January last year, but the lockdowns and the previous season’s cancellation found us in a difficult situation,” he said. “But I feel we are coming out of lockdown as a much stronger team due to the hard work every Olympian put in during these months.

“I really look forward to meeting my old and new teammates and coaches in person again, continuing to make progress as an organisation and just play some ball.”

James Watson, who is also based near Canada Water, is a new recruit as an offensive lineman.

“I can’t wait to back on the pitch be it training or game-day,” he said. “Having had my uni-bowl career cut short I can’t wait to not only train with a brand new team, who I know will become like family, but to compete in the top league in the country.”

The club want more people to get involved. They can be reached at recruitment@olympiansfootball.org or through their website, londonolympians.com.