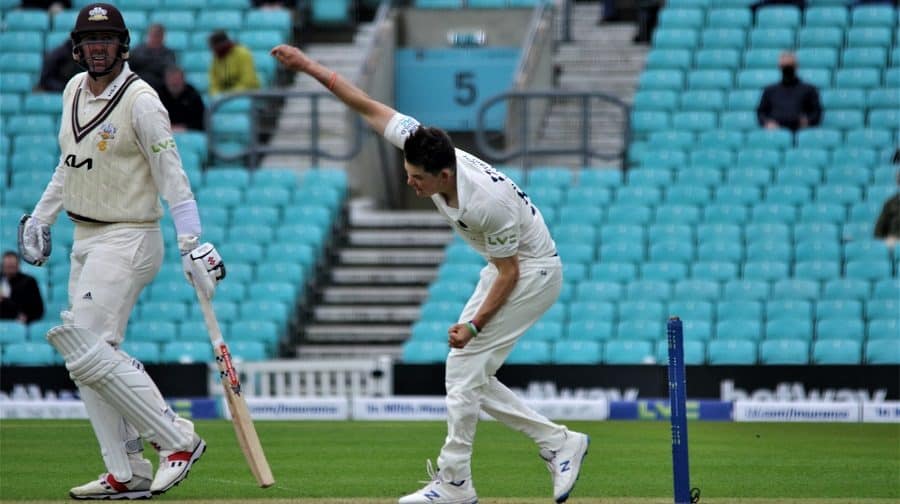 Surrey were saved by the weather after Nick Gubbins hit a billiant 124 from 145 balls as he and Peter Handscomb looked as if they were going to sweep Middlesex to a dramatic last-day victory against their close rivals at the Kia Oval last weekend.

In the end, Middlesex could only reach 250 for 6, a cruel 40 runs short of their win target when time ran out, with Kemar Roach finishing with 5 for 86 as four Middlesex wickets tumbled in a desperate late bid to score what became 74 from eight overs, rather than 13.That equation changed because of a rain delay of 20 minutes from 5.55pm.

Middlesex had been sitting pretty on 216 for 2, after being set 290 from an initial 71 overs when Surrey declared their second innings on 259 for 2 with Rory Burns scoring 104 not out and Ollie Pope a cameo unbeaten 37 from 20 balls.

Nine mid-afternoon overs had also already been lost to rain but, from 47 for 2, Gubbins and Handscomb had met the run-chase challenge in a cool and controlled partnership of 172 that featured some high-class batting from both players on a still excellent surface.

On the resumption, at 6.15pm, Handscomb was almost immediately caught on the cover ropes for 70 and although Gubbins swung Roach for a defiant six their hopes ended when the left-hander hit the West Indies paceman to deep extra cover.

Both counties took 11 points from the LV= Insurance County Championship draw, with Surrey remaining fourth in Group 2 and Middlesex staying bottom of the six-team conference table.

Gubbins batted beautifully and has now scored 455 runs this season, while Middlesex captain Handscomb put a wretched five weeks of poor form – 60 runs from eight innings – behind him in what was a triumph of character for the Australian.

Jack Davies, close to being lbw to a Roach near-yorker, was earlier well-caught in the gully by Pope off a leading edge for 2 as he tried to work Roach towards mid on and Sam Robson’s solid 32 ended when Reece Topley was recalled for the 17th over and his third ball, angled across the batsman, was nicked to second slip.

Surrey batted on for 100 minutes, adding 124 to their overnight 135 without loss and Burns completing his first hundred of the championship season, after six half-centuries in his previous nine innings. The England Test opener has now scored 554 runs at 61.66 this season and looks in good order ahead of the two-match series against New Zealand in early June.

Mark Stoneman fell to the day’s third ball, nicking Ethan Bamber behind without addition to his overnight 74. His opening stand of 135 with Burns was the equal highest identical opening partnership in first-class cricket, matching the two 135s put on by Sussex openers Kepler Wessels and John Barclay against Somerset at Hove in 1979.

Hashim Amla then reached a useful 43, once picking up Tim Murtagh’s medium pace for six over long leg, before skying the same bowler to deep mid wicket, while Pope took two sixes and a four from one Murtagh over.

Surrey fast bowler Kemar Roach said: “What a day. It was a brave decision to declare just before lunch and set them a target but we wanted to get ten wickets and the win.

“But the ball didn’t do as much as it had done in the first innings and it surprised me that it didn’t do anything as conditions were overcast. But the pitch was slow and good for batting and credit to Gubbins and Handscomb for the way they batted. In the end, we held our nerve and to come out with a draw almost feels a bit like a win.”

Roach, who took 22 wickets in five championship games, said of his first spell as a Surrey overseas player: “I have loved every minute and it has been amazing. I really hope I can come back again and help the team win the championship.”