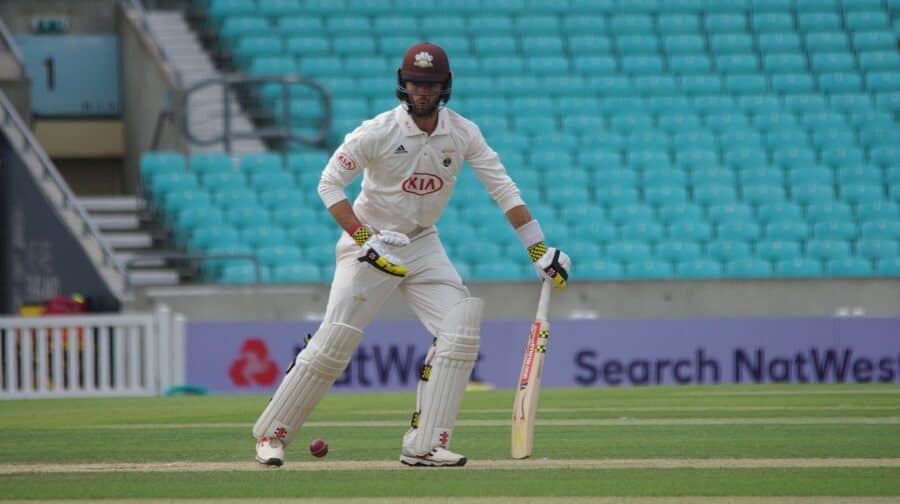 Darren Stevens celebrated being offered another year’s contract by Kent at the age of 44 by taking 4 for 41 to spearhead a thrilling seventeen-run victory against Surrey at the Kia Oval and keep his county’s Bob Willis Trophy south group qualification hopes alive.

Surrey, needing 192 to win from 62 overs after bowling Kent out for a second innings 127, were themselves bowled out for 174 deep into the final session of a memorable contest.

Matt Milnes was Kent’s other bowling hero, taking 4 for 57 – including the dramatic final wicket – and also producing superb deliveries to bowl both Sam Curran and Rikki Clarke either side of tea.

Stevens had taken three wickets in nine balls in his opening spell to leave Surrey reeling at 20 for 4 but Ben Foakes’ excellent 57 had left Kent wondering if they could close out the victory despite taking regular wickets at the other end.

Indeed, the last hour had just started, with fifteen more overs remaining, when Milnes clipped the top of Matt Dunn’s off stump to bowl him for a brave twelve and give himself final figures of 4 for 57.

Dunn had been left to make 28 runs for victory with only No 11 Amar Virdi for company after Harry Podmore had rather fortuitously ended the second superb innings in the match by Foakes, having him well held by diving keeper Ollie Robinson from a legside ball after he had added another composed and high-class effort to his first innings 118.

Milnes’ other scalp had been that of Adam Finch, leg-before for 6 with 56 still required. There may not have been any spectators watching, but there was no shortage of tension, particularly when Foakes and Dunn were adding a calm 28 in 10 overs for the ninth wicket, as Kent fretted.

Kent’s 22 points, and second win in four matches, puts them just six points behind south group leaders Essex with just the September 6-9 round games to go.

Podmore picked up Mark Stoneman’s wicket in his own new ball burst during Surrey’s calamitous start to their chase, but Foakes and Laurie Evans then boosted Surrey’s hopes with a fifth wicket stand of 57, until the irrepressible Stevens returned to the attack to take a smart catch off his own bowling with his third ball back to send Evans packing for a fine 53-ball 42.

And Milnes made Kent heavy favourites, going into the last session, by nipping one back between left-hander Curran’s bat and front pad to bowl the England all-rounder for fourteen and, in the second over after the interval, also defeating Clarke’s attempted drive.

The evergreen Stevens has now bagged 20 wickets at 19 runs apiece in Kent’s first four Willis Trophy fixtures. But it is his record in the past decade that is most remarkable, especially when remembering that the veteran all-rounder has also hit more than 7,500 first-class runs since 2010, including sixteen centuries and 39 other scores above 50.

Here, he began by removing Scott Borthwick and Jamie Smith with his fifth and sixth deliveries to leave Surrey 6 for 2 at the end of the second over. Borthwick chipped to short mid-wicket off a leading edge, where Daniel Bell-Drummond took a fine diving catch, and Smith edged a forward push to Jack Leaning at second slip.

There was no hat-trick but, with the first ball of his third over, Stevens won a leg-before decision to send back Will Jacks for six and – by then – Podmore had also had Surrey’s acting captain Mark Stoneman caught at first slip for ten.

Jordan Cox, the catcher, threw the ball high into the air and let out a roar of celebration because, from the fourth ball of Surrey’s second innings, Cox had dropped Stoneman on two off a similar ball from Podmore that lifted and left the former England opener.

No play had been possible before lunch, due to heavy overnight and morning rain, but hard work by the Oval groundstaff meant that a start could be made at 1.10pm with Kent resuming on 118 for 9 in their second innings.

Last pair Nathan Gilchrist and Hamidullah Qadri added a further nine runs in four overs before Curran had Gilchrist caught at first slip by Clarke for thirteen to finish with 4 for 39. Clarke, whose brilliant five-wicket spell had sliced through Kent’s second innings on day three, finished with 5 for 20.