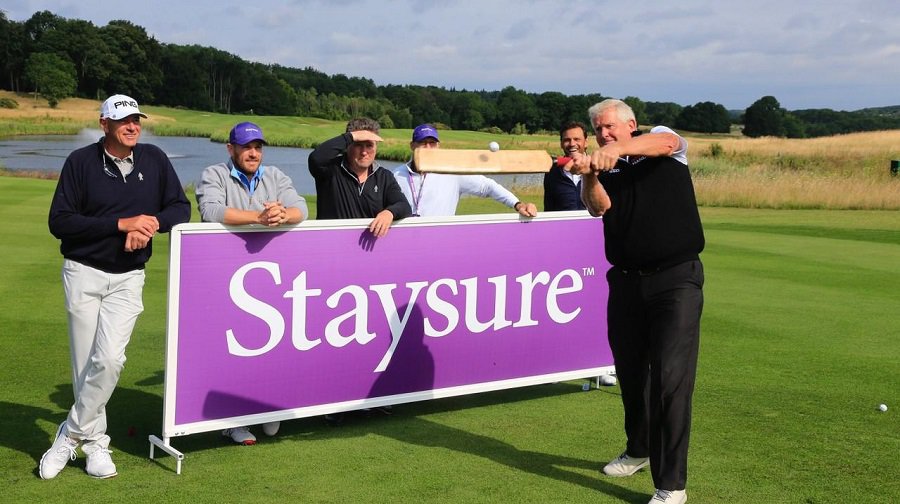 Aaron Finch (second from left) and Mark Ramprakash (far right) look on as golfer Colin Montgomerie hits out with a cricket bat in the 'Alternative Ashes' event played at the London Golf Club. Photo: Getty

Aaron Finch had the chance to win ‘The Alternative Ashes’ for Australia on Wednesday, on a day off in between Surrey’s Vitality Blast fixtures and 24 hours before the real Ashes battle begins, but saw one of Britain’s greatest golfers pip him to the prize.

The venue for what was a determinedly fun ‘cricket and golf event’ was the London Golf Club, near Brands Hatch in north Kent, where Surrey’s Australian batsman Finch found himself on opposite sides to Ryder Cup hero Colin Montgomerie in a series of crossover challenges.

The event was designed to publicise the Staysure PGA Seniors Championship, which starts at the course on Thursday, on the same day as England and Australia’s cricketers go head-to-head on the opening day of the eagerly-awaited Ashes series.

Montgomerie, a winner of 31 European Tour titles and 25 other senior and regular tournaments around the world, hit the winning ‘putt’ with a cricket bat to within three feet of a pin 22 yards away.

The two other previous elements of the challenge involved a nearest the pin contest from 80 yards, using a cricket bat to make contact with a moving golf ball, and trying to dislodge the bails from a set of stumps by hitting them with a golf ball from a cricket pitch length away.

Ramprakash won the nearest the pin contest, putting England 1-0 up, but Finch levelled matters for Australia in the next challenge when an accurate chip hit the middle stump from 22 yards away – only for Scotsman ‘Monty’, an honorary Englishman for an event which preceded the golf tournament’s ProAm, to claim the

Various television crews filmed the event, which was officiated by former Kent, Durham and England fast bowler Martin Saggers, now a leading umpire and who was also due to play in the ProAm tournament on Wednesday.

Montgomerie, who learned to play cricket while at school in Yorkshire, graciously received a replica Ashes urn from Ryan Howsam, chairman of Staysure, and said: “That was great fun. I enjoyed my cricket when I was living in Ilkley as a youngster and this was a relaxing and enjoyable way to start what is a very big week for the Staysure Tour and the players competing for an important title over four days at London Golf Club.”

Finch, meanwhile, captained Surrey in last night’s Blast defeat to Kent Spitfires in a rain-reduced seven-overs per side match at the Kia Oval because of injury to the club’s T20 captain Jade Dernbach – and is set to continue in the role when Surrey travel to Taunton to take on Somerset in their next South Group fixture at the Cooper Associates County Ground on Friday evening.

Surrey’s 54 for four, in which Finch alone made any headway against the Kent bowling attack with 36 not out from 20 balls, proved woefully inadequate as Afghanistan all-rounder Mohammad Nabi, the Spitfires’ new overseas signing alongside the returning New Zealand paceman Adam Milne, crunched five sixes in an explosive 12-ball 43 not out as the group leaders ran out comfortable winners by nine wickets.

Finch said: “Perhaps we needed to concentrate on just getting bat on ball a bit more early on, so that we rotated the strike and didn’t just go for big shots, but it was difficult after all that rain delay to come out and try to go hard from the start.

“I think in T20 you are always learning from your experiences, and talking about how we approach things – especially with the younger players – is the way to go. But we also need to recognise what we do well in short-form cricket and concentrate on that.”