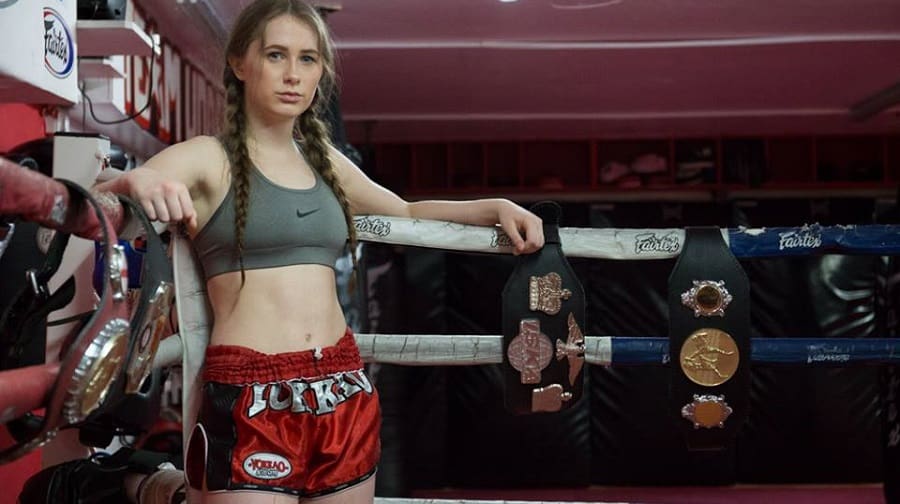 JONATHAN HAGGERTY is talking about one of his fighters in the Team Underground gym on Old Kent Road.

“We had one lad who was banned from all the shops out on this street, he was terrible. I reckon if he hadn’t come in here he’d have ended up somewhere not good.

“We basically saved him. Believe it or not we got him unbanned from all the shops. We took him in and told them, ‘he’s a good boy, he’s under our watch now’.”

You’d hardly notice the gym was there until you see Jonathan, 21, standing at the door directing a stream of kids inside following their pre-session run.

It’s 30 degrees on a July evening and down a narrow staircase it’s even hotter, the thick smell of sweat and the sound of fists and legs pounding into punch bags an intense assault on the senses.

The fighters range in age from ten to fifteen. They have pads on their forearms that their partner strikes with feet, fists or elbows, the coordinated sparring like a violent dance routine. One misjudgement could result in a bare shin to the temple. One little slip of a girl is upset because she feels she’s not doing a proper job for her partner. Jonathan takes her aside to offer assurances. She was encouraged to take up martial arts by her parents after being bullied at school.

Jonathan and his dad, Jon, run the family gym. No kid is turned away if they can’t afford to pay. They coach Muay Thai and K-1 kickboxing, similar disciplines but with different striking rules.

Father and son are in the gym seven days a week, often until ten o’clock at night. Jonathan is a world champion Muay Thai boxer and trains twice a day seven days a week as well as coaching.

More kids want to join – and they also train adults – but they need a bigger premises. They certainly need extra wall space for the vast collection of title belts accumulated by their fighters.

Not all the kids in this gym were picked off the streets, but fifteen-year-old Cori McLean was worried what future the present was leading him to, as was his mum, Nannette.

“I used to be hanging around a lot on the streets,” Cori, who lives on Old Kent Road, says. “My mum told me it would be good for me, physically and mentally. It was her that said I needed to do any sport that would help me, like football, basketball.

“I thought boxing would be better for me because it helps you mentally, it makes you a stronger person. If you can take these punches you can take anything, really.

“When I got into my first fight at school I thought, ‘I need to stop’. It could end up with me being arrested. I needed to dedicate my time to something that would help me.

“I thought it was time to get myself out there and known for a good reason instead of a bad reason.

“I heard people talking about Jonathan Haggerty. Everyone knows about him. He teaches us discipline and how to stay composed.”

On the streets, as in the ring, the biggest the battle is often against yourself.

James Pocknell, fifteen, from Jamaica Road, already sensed he needed to change course in his life.

“I got bored on the streets. I thought I’d come here and put something to use, see how I’d get on,” James explains.

“My dad knew about this place. He took me and I haven’t stopped.”

In April, just over a year after taking up the sport, James cut weight twice before a kickboxing event in Luton only to see both opponents pull out. That should have been that, but he was offered the chance to face John Vetle, a Norwegian world champion who had fought over 100 times. On three hours’ notice, James won to claim the Amateur Kings’ belt.

“I didn’t feel nervous because I knew if I lost I’d still fought the best. I had nothing to lose and everything to gain so I just did my best,” James says.

“I was going down the wrong side. This has changed me. I don’t really go out anymore. I find it boring. I come here, train, and go home.”

In a modern world that seems designed to provide increased technological distraction often targeting young people and isolating rather than connecting them, there is something more spiritually rewarding in a less complicated life.

For the parents of Cori and James, Team Underground is a blessing. But some would surely brace at the idea of letting their kids become involved in a sport that, on a basic understanding of it, rewards violence. Jonathan Haggerty (far right) with his fighters and their array of title belts.

Walworth Road’s Steve Cooke encouraged his daughter Chloe, now seventeen, to start martial arts when she was nine. She was shy then and Steve knew she needed to be drawn out of herself. Muay Thai, or The Art of Eight Limbs – so called because striking can be with fists, elbows, knees and shins – wouldn’t be the first thing you’d think of as the solution.

But Steve had different ideas, and he used an interesting leveraging tool.

Steve explains: “When she was younger she was really timid, she didn’t want to do anything. She just wanted a cat. I told her she had to get out there and do something. So she said: ‘I’ll do anything you want if you get me a cat.’”

The cat didn’t work out – “it was a moany little thing,” Steve says, and it was returned to Chloe’s aunt – but the fighting did.

In January this year, Chloe, after winning a scholarship, spent six months in Thailand at the prestigious Fairtex Pattaya, which trains fighters from all over the world. She was already a Muay Thai world champion and puzzled her dad one evening after her return.

“She went to a Thai school on Sundays after training to learn Thai,” Steve says. “I didn’t know that until she came back, and she asked me in Thai to cook her dinner. She can speak Thai now, which is amazing.

“It doesn’t matter whether you’re female or male, if you want to go ahead and do something then do it. We’ve got girls from the age of five that are doing it to keep fit. My daughter was doing it to keep fit until she turned round and thought, ‘maybe I can make a career out of this’.

“She went from a shy nine-year-old who didn’t really use to talk to anyone, to becoming the UK number one.”

If nine seems young to engage in contact sports, try three. That’s the age Riley Smith, thirteen, was when he started training and he had his first fight at five.

He has since fought around 130 times – including in Thailand, France, Netherlands and Spain – and is so good that matching him with opponents is a bigger challenge than beating them.

“He’s at world championship level,” says his mum Zoe, who brings her son to training from Plumstead and waits with the other parents at the back of the gym until the sessions finish.

“He fights about ten times a year if we can get them. He often fights way above his age. He normally gives away three, four years in age.

“I love it. I get nervous when he fights but he’s at a really high level now.

“In school he used to be in a class with the big boys and find it intimidating, he would get a bit tearful.

“But when he started getting good and realising he was good he started to enjoy it.”

Discipline is a word repeated over and over in the gym. Leigh Jarvis explains why he got his ten-year-old son Zac involved.

“I just think that martial arts for kids is a good discipline. It teaches him to use his brain sensibly as well as his body,” Leigh says.

“It forces them to make conscious decisions about things in life. He’s had a little experience like that where he’s had to make a decision, and based on this martial arts he’s been able to make the decision the right way.”

What does Zac think when he is opposite his opponent in the ring? “I want to hurt this guy,” he responds.

Steve Cooke emphasises the respect that exists between opponents and between parents. “If you tell someone that my child fights the initial reaction is: ‘That must be brutal, how could you do that?’ Once they come and see the respect and the bond and friendship between the children, the parents, everything changes.”

Steve’s son David, fifteen – brother of Chloe – holds an English title in kickboxing and explains the attraction of the sport. “You’re living in the moment and there’s no better feeling after you’ve done all the work, all the sweat and tears. You’ve beaten someone who has trained to beat you.

“You don’t want to mess up your life, you want to train hard and work hard. It will all pay off. If you’re doing things you shouldn’t be doing, coming in here keeps you out of trouble. It’s also fun, there’s nothing better than coming in to see your friends and having a little joke. It’s not serious all the time.

David’s friend Frank Mulley, fourteen, has English, British and world titles in K-1, and, like most of the kids, has ambitions to make it a full-time career.

Jonathan’s next move will be into the UFC, the mixed martial arts organisation whose fighters can earn millions.

“I’ve got an MMA coach (Steve) who has good contacts in the UCMMA (a UK promotion). I’ll have no problem getting on there, they’re begging for me,” Jonathan reveals.

“I want to get a few more titles in Thai boxing and then move to MMA. People tell me not to do it, but it’s not them, it’s me.

“I want to go into it with a bit of a background so you don’t get forgotten about. If you go in with world titles the commentators introduce you as ‘ten-time world champion…’, so people will keep an eye on you. You want to stand out.

“I think I could earn a lot more money. There is more money in general in the cage. The level you start at isn’t great but you’ve got to start somewhere.”

If he succeeds, and his sheer dedication and talent suggests he will, it would be full-time and his loss to this area would be huge. But Jon will continue to run the gym.

At a time when front pages of the capital’s newspapers are dominated daily by the latest knife crimes, and the reasons for the surge from policing cuts to social media fuelling gang violence are discussed, this kind of work is saving the government thousands of pounds. Yet they remain unfunded when this is exactly the kind of community initiative that needs to be highlighted and backed with money to help them grow into something bigger that more people will hear about.

There is always an excuse for vying politicians to reach for to pass on the blame for the underlying causes of what can at times seem like disintegrating social cohesion.

Meanwhile, others just get on with making a difference.