The Peckham side fell to a battling away defeat 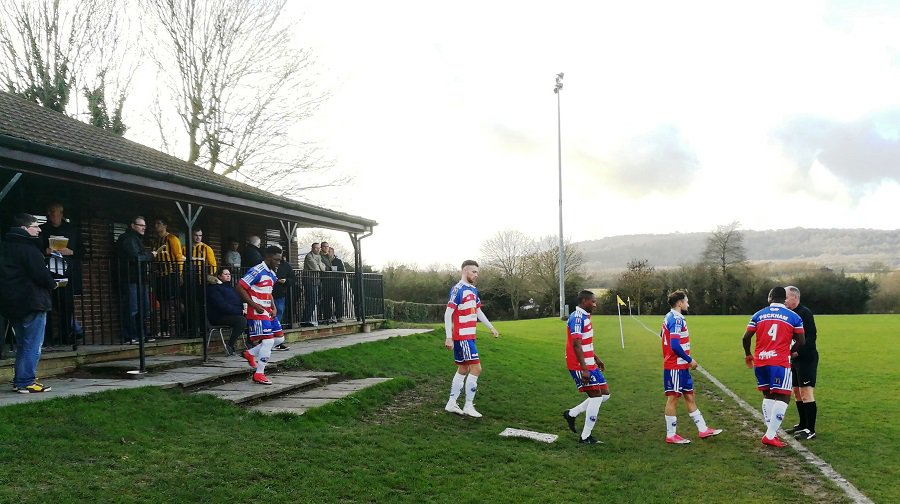 AN EARLY early red card put paid to Peckham Town’s hopes as they returned to action in the Kent County Premier League and succumbed to a 4-2 defeat at Hawkinge Town last weekend.

Town made just the one change to the starting line-up that put in a stellar performance away to Otford in their last outing. Hiram Laud–Anderson returned to the middle of the defence, with Lewis McIntrye unavailable.

Peckham started on the front foot, and almost took the lead on two occasions, but Town’s chances soon suffered a cruel blow. December’s player of the month went from saint to sinner as Hady Traore retaliated following a late challenge. The referee had no hesitation in brandishing a straight red card.  It was always going to be an uphill struggle when a man short against the league’s second-top scorers, who had knocked in eighteen goals in their last three games.

Hawkinge Town’s direct style of play soon began to cause concern for the Menace defence, and it didn’t take long for the home side to take the lead, as Darren Winfield opened the scoring.  John Smith doubled the lead midway through the first half, and Daley Sinclair added a third shortly before half-time. The third goal left the frustrated Menace a mountain to climb in the second half.

Unsurprisingly, Peckham rang the changes at half-time. Yaya Barry stepped off the bench to replace Adrian Butler, who was feeling the effects of a groin strain, and Adam Tarrant replaced Adam Toubal, who suffering from the aches and pains of the flu. The changes led to a much-improved ten-man Peckham Town performance in the second half, as the Menace raced through on goal several times, but found the home keeper in fine form.

Peckham’s pressure was rewarded on the 70th minute, when Nicky Meta continued his personal hot goal-scoring streak, and reduced the arrears for Peckham.  The comeback looked to be on when Tarrant was upended in the box, and Town increased the tension when Lukmon Mojeed sent the keeper the wrong way from the resulting spot-kick after 85 minutes.

The Menace pushed hard for an equaliser that their second-half performance merited, but Hawkinge secured all three points when Reece Mortimer scored on the break for the home side.

The final whistle was sounded soon after, as Peckham had to make the long journey home with nothing to show for their efforts, and left wondering what might have been if they had been able to maintain eleven players on the pitch.

Chairman and founder, Bryan Hall, said: “We didn’t show up until late in the game, and with the addition of having a man sent off and two players struggling with injuries, then the result was no real surprise.

“We now turn our attention to our first game back at the Menace Arena for the new year on Saturday.”

The Menace kick off at 2pm on Saturday, January 12, when they host Fleetdown United. Entry is free and they have Brick Brewery beers and other refreshments in the welcoming clubhouse.

You can keep up with all the Menace news on Twitter and Instragram by following @PeckhamTownFC, as well as the club’s website at http://www.peckhamtownfootballclub.com.