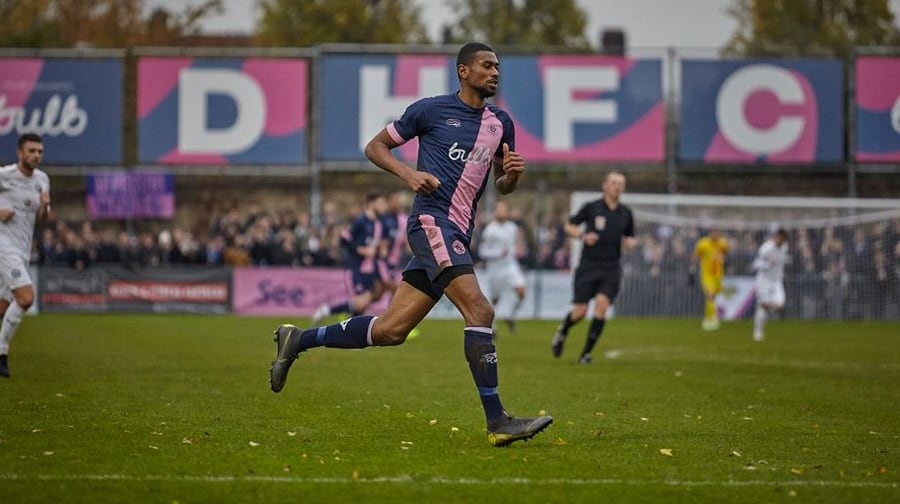 Dulwich Hamlet striker Danny Mills believes Hampton & Richmond’s controversial second goal in their 2-1 win at Champion Hill on Boxing Day was another example of fine margins costing points in a season of underachievement.

Mills, however, was unsurprised by the decision.

“Based on the ref’s actions today he wasn’t giving big decisions. I’ve had him before and you’re not going to get much out of him,” Mills said.

“From my point of view JC [Jack Connors] has got to the ball and gone down. It’s one of those ones really, sometimes given, sometimes not.”

It was an emotional Boxing Day for the 2,089 crowd in SE22, as Champion Hill observed a minute’s silence to mark the first home game since iconic supporter Mishi Morath’s death.

The team were unable to build on their 4-1 win at Hungerford, and Mills rued the season’s latest costly moment.

He said: “They’ve gone right down the other end and scored. It’s a sucker-punch because we go from being on the ascendancy to then conceding again. For an away team, 2-0 in the second half is job done.

“We know we’re underachieving this year and a lot of small things have gone against us in big ways. It might be someone out of position or a mis-placed pass. We seem to be getting punished for these little mistakes.”

But the frontman remains adamant that results can improve, and highlighted his blossoming understanding with recently-signed striker and goal-scorer against Borough Dylan Kearney as a particular positive.

“One of the big differences now with Dylan being up there is he’s reading the flick-ons really well,” Mills continued. “We’ve not really had that this season

“I’ve been winning a lot of balls in the air and we might just miss it or not be where we need to be.

“But in the two games I’ve played with Dylan he’s read it really well and we look like we can be a good partnership and a threat.” Kearney netted his first home goal in the 77th minute, driving a low free-kick through the wall to halve the deficit.

Mills praised Hampton & Richmond for how they preserved the three points.

“They defended really well and were resilient. The goal gave us energy for that last push. We huffed and puffed but couldn’t get over that line.

“We got Christmas day off. The gaffer was good, he gave us a couple of days to spend with our families which is always nice, so we’ve come in rejuvenated [on Boxing Day].

“It’s always a nice time of year and better if you can get three points Boxing Day, but we can take positives from the second half.”