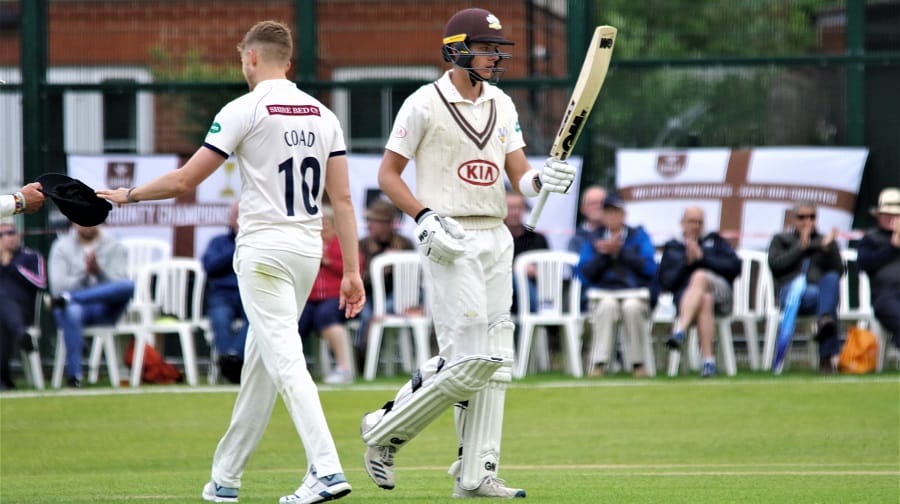 MORNE MORKEL took three wickets in his first two overs and Jordan Clark, on his Surrey championship debut, was close to bagging a hat-trick in his own opening over of the day as Yorkshire were bowled out for 148 and asked to follow on at Guildford.

But the loss to rain and bad light of a total of 49.3 overs in the day – including the match being called off 20.3 overs early at 5pm when more rain arrived – eventually allowed Yorkshire to secure the draw at 30 for no wicket from 13.3 overs in their second innings.

They had followed on with 38 overs left in the game and 165 runs behind Surrey, who had scored 313 in their first innings of a match which, in all, saw more than six sessions lost to bad weather, including Monday’s opening day wash-out.

Indeed, just 26 overs were possible in the first two sessions of day four, due to heavy showers, but initially Yorkshire crumbled to 95 for 7 in the 12.3 overs bowled in the morning, after play had begun on time, with the visitors losing six wickets for 37 runs before an early lunch was taken at 12.45pm.

Play did not re-start until 2.30pm, as rain continued to fall, but Rikki Clarke picked up the wicket of Steven Patterson for 6 and Morkel clean bowled Ben Coad for a duck to give himself figures of 4 for 43. A last wicket stand of 34 in 5.1 overs between Jordan Thompson, who had earlier survived Clark’s hat-trick ball, and No 11 Duanne Olivier delayed Surrey for a while – but Morkel then hung on to a fine catch at long leg to dismiss Thompson for a hard-hit 34.

Resuming on 58 for 1, Yorkshire saw Gary Ballance fall to the final day’s first ball when the Specsavers County Championship’s leading run-scorer edged a lifter from South African pace ace Morkel to gully to go for 6.

In his second over Morkel removed both opener Will Fraine, who had gone from his overnight 17 to 25 before edging behind, and Jack Leaning for 4. Keeper Ben Foakes this time dived to his right to scoop up a brilliant low catch when Leaning nicked another fine ball from the rampant Morkel, who had suddenly reduced Yorkshire to 79 for 4 with his first, eighth and twelfth balls of the morning.

Worse, however, was to follow for Yorkshire when 28-year-old seamer Clark replaced Morkel at the Pavilion End. Clark, who last summer claimed what many reckon to be the greatest hat-trick in cricket history when, playing for Lancashire against Yorkshire at Old Trafford, he dismissed Joe Root, Kane Williamson and Jonny Bairstow , struck with his fourth ball when Jonny Tattersall, on 7, slashed a thick edge to first slip where Clarke took a fine catch above his head.

Then, with his next ball, Clark saw Dom Bess smartly caught low down by Clarke as he pushed defensively and there was just time for Thompson to jam down late on the hat-trick ball to stifle what would have been a concerted Surrey appeal for lbw before a rain shower drove the players off for a ten-minute interruption.

At that stage Yorkshire had lost five wickets for 35 runs in 8.5 overs and, when play resumed, Clarke had Tom Kohler-Cadmore caught for 14 off what looked to be glove and hip by Foakes as he tried to leg glance a short ball. That was 93 for 7 and, three overs later, more rain arrived to delay proceedings until mid-afternoon.

Thompson, the 22-year-old all-rounder on his first-class debut, drove Clarke high for six and also struck five fours before hooking Matt Dunn to Morkel, while Olivier twice hit Clark to the cover boundary to contribute 13 not out to the bright and breezy tenth wicket stand.

Surrey take 11 points from the draw and Yorkshire 8.