The Bermondsey and Rotherhithe figurehead's funeral will take place on June 20, while a special mass will be held on June 17. 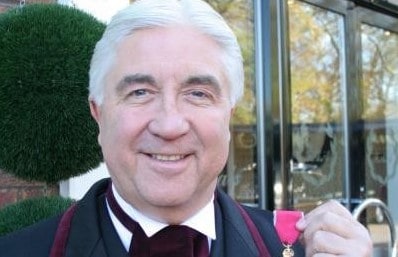 Hundreds of people are expected to pay tribute to Barry Albin-Dyer over the following days, with details announced for his funeral and a memorial church service.

The clocks stopped in Bermondsey on Saturday when it was announced that Barry Albin-Dyer had passed away.

The funeral director, who comforted so many through their darkest hour, bravely battled cancer for well over a year before dying peacefully in his bed surrounded by his family at the weekend.

In his thirty years at the head of the FA Albin & Sons table, it is impossible to count the thousands of people Barry brought comfort to – the mothers, fathers, sisters and brothers who came through his doors and were all treated with the same dignity and respect as if they were his own.

‘He really looked after me’ is a phrase uttered by so many who felt his gentle hand on their shoulder as they said goodbye to a loved one.

Proudly carrying on the family firm, which has been burying the people of Bermondsey and Rotherhithe for over 200 years, Barry has led funerals where the streets have been lined with thousands of mourners. It was Albins’ pallbearers who carried ten-year-old Damilola Taylor’s small white coffin in 2001. In 2004 the police guarded the Albin’s funeral cortège of Walworth-born Private Lee O’Callaghan, one of the first British troops to be killed in action in Afghanistan, and flowers carpeted the streets in 2009 when an Albin’s hearse drove Bermondsey’s Jade Goody to her final resting place.

In 2010 his dignified work repatriating British troops after they had been killed in battle in Afghanistan was recognised by the Queen, who awarded him an OBE.

This was undoubtedly one of Barry’s proudest moments, but he valued just as highly the memorial service he put on every year and the memorial garden it was held in. Thousands of local people were brought together on that one freezing night every year to remember the loved ones they had lost, in good company.

From an elaborate send-off for an Indian Bishop to a horse-drawn carriage making its way down the Blue, he gave every death his respect and the living his undivided attention.

Then there are those he has helped through his charitable work, generous donations and the Albin Dyer Bermondsey and Rotherhithe Foundation, which has paid for everything from a minibus for the disabled to local student scholarships.

A humble man, Barry never shouted about the good deeds he did, and in his quiet way he helped countless more with a listening ear, a shoulder to cry on and a word of sound advice.

Without his kind heart and sharp mind this newspaper would not be here today. After the death of the paper’s founder Dave Clarke in 1998, Barry stepped in and guided its fledgling reporters to the point where they could take it on themselves.

There are many lessons to be learnt from the way Mr Barry Albin-Dyer chose to live his life and it is for that reason and all those listed above that we decided to dedicate so much of the paper this week to a great man who will be sadly missed by so many.

Anyone wishing to pay their respects to Barry Albin-Dyer can visit the Albin’s chapel of rest in Culling Road, SE16 2TN, on Saturday, June 13. His body will be lying in repose between 9am and 1pm.

A special mass for Barry will be held at St George’s Cathedral, Westminster Bridge Road, SE1 7HY on Wednesday, June 17. The service will begin at 6pm.

Barry’s funeral will take place on Saturday, June 20. It will be held at Most Holy Trinity Church, Dockhead, SE1 2BS, and will begin at 11.30am. Seating in the church is not guaranteed, although the service will be shown on screens outside. A funeral cortege will leave Albin’s in Culling Road at 9.30am and will pass through Bermondsey on a route which will be confirmed and advertised in next week’s News.

Following the service, Barry will be laid to rest at a private ceremony in the Albin’s memorial garden.

To read about how Barry saved the Southwark News click here